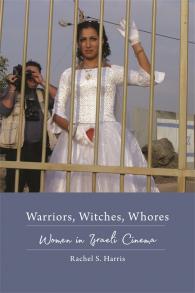 Warriors, Witches, Whores: Women in Israeli Cinema is a feminist study of Israel’s film industry and the changes that have occurred since the 1990s. Working in feminist film theory, the book adopts a cultural studies approach, considering the creation of a female-centered and thematically feminist film culture in light of structural and ideological shifts in Israeli society. Author Rachel S. Harris situates these changes in dialogue with the cinematic history that preceded them and the ongoing social inequalities that perpetuate women’s marginalization within Israeli society.

While no one can deny Israel’s Western women’s advancements, feminist filmmakers frequently turn to Israel’s less impressive underbelly as sources for their inspiration. Their films have focused on sexism, the negative impact of militarism on women’s experience, rape culture, prostitution, and sexual abuse. These films also tend to include subjects from society’s geographical periphery and social margins, such as female foreign workers, women, and refugees. Warriors, Witches, Whores is divided into three major sections and each considers a different form of feminist engagement. The first part explores films that situate women in traditionally male spheres of militarism, considering the impact of interjecting women within hegemonic spaces or reconceptualizing them in feminist ways. The second part recovers the narratives of women’s experience that were previously marginalized or silenced, thereby creating a distinct female space that offers new kinds of storytelling and cinematic aesthetics that reflect feminist expressions of identity. The third part offers examples of feminist activism that reach beyond the boundaries of the film to comment on social issues. This section demonstrates how feminists use film (and work within the film industry) in order to position women in society. While there are thematic overlaps between the chapters, each section marks structural differences in the modes of feminist response.

Warriors, Witches, Whores considers the ways social and political power have affected the representation of women and looks to how feminist filmmakers have fought against these inequities behind the camera and in the stories they tell. Students and scholars of film, gender, or cultural studies will appreciate this approachable monograph.

Rachel S. Harris is associate professor of Israeli literature and culture at the University of Illinois, Urbana-Champaign. She is also the author of An Ideological Death: Suicide in Israeli Literature and co-editor of Narratives of Dissent: War in Contemporary Israeli Arts and Culture (Wayne State University Press, 2012).

Warriors, Witches, Whores is the first book to attempt an analysis of the transformation beginning in the early 1990s in women’s representations in Israeli cinema, culminating in the tremendous surge of films made by female directors in the last fifteen years. Juxtaposing previous representations with contemporary ones, these thematic and cinematic readings brilliantly expose innovative narratological and cinematic modes utilized to engage with the dual need to both conform to Zionist national discourse together with depictions of revolutionary feminist agendas regarding the female body, women’s sexuality, and Israeli masculinist culture. Israeli female experience is presented in its intersectionality of gender, nationality, ethnicity, and religion, thus touching on crucial societal divisions. This book offers a unique portrayal of the successes as well as the failures to achieve a different outlook on women’s lives in Israel.

Employing the insights of cultural studies and third-wave feminism, Harris traces the evolution of feminist filmmaking in Israel since the 1990s. She cogently examines how Arab and Jewish Israeli women have reconfigured the cinematic portrayal of female characters and the roles they play within the army, diverse ethnic enclaves, the Israeli-Palestinian conflict, religious subcultures, and normative and illicit sexual encounters.

Carefully placing a wide range of fictional, documentary, and festival films in cultural, social, and political contexts, Harris's insightful and multifaceted analysis identifies the feminist possibilities and problematics in contemporary Israeli cinema. In addition, she offers a fascinating discussion of activists’ efforts to make space for more women in the industry, as well as to maintain feminist film festivals and organizations.

– Sarah Projansky, professor of film and media arts and of gender studies at the University of Utah

In her fascinating and timely study, Rachel Harris brings western feminist film theory to bear on the specifics of Israeli cinema. She first shows how the Israeli narrative of a Jewish national identity incorporated women into the patriarchal order, making it difficult to develop a feminine identity. Later chapters explore female narratives that contested women’s positioning, and finally Harris looks beyond this history to women’s feminist activism in recent Israeli films. Through careful reading of cinematic techniques in select Israeli films from the 1950s on, together with striking supporting images, Harris provides solid evidence for her arguments.

For Jewish feminists interested in the intersections of film, feminism, and Israeli culture, Harris’s academic study provides valuable questions and insights. Not to mention the book provides quite the watch list

Warriors, Witches, Whores is an important contribution to Israel studies. It maps out a field of cultural representation of women and offers a thorough reading of this map. The work provides a challenge to Israeli filmmakers who try and dance through the minefield that is the representation of women—one can only hope that a Hebrew version will be issued. Though highly critical, the book also acknowledges the difficulties inherent in this representation. Teachers of Israeli film courses will be especially grateful to Harris’s contribution. Because it is so good at explaining the dynamics of Israeli society and culture, the book or parts of it can also serve as an introduction and context for film analysis. Scholars of Israeli culture now have a resource for discussing the representation of Israeli women in film, and a text with which to argue about where the significance of such representation lies.