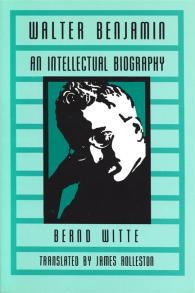 Remarkably free of ideological restraints and interpretative hubris, [this book] is probably the best introduction to Benjamin's thought . . . available in English.

Walter Benjamin (1892-1940) was the quintessential European intellectual between the two world wars. Historian, philosopher, literary critic, student of language and culture, and journalist, the independent scholar was forever trying to define himself and his time as products of a tradition in crisis.

In a very real sense, Benjamin's life and work were one—a chronicle of the modern European intellectual and mirror of an era. Bernd Witte's interpretive biography introduces Benjamin through critical thought and through topics and authors that ignited Benjamin's work. For the first time, English readers have the opportunity to survey the facts surrounding Benjamin's life and assess the interpretations of his texts. Witte's quest for Benjamin's own perspective yields a full chronology and sympathetic mastery of Benjamin's ideas.

Bernard Witte is a professor in the Department of German Languages and Literature at Heinrich Heine University in Germany. He is the author of various books on modern German literature and literary theory, and is the editor of the collected works of Christian Fürchtegott Gellert.

Translator James Rolleston is a professor of German and literature and chair of the Department of German Languages and Litearture at Duke University.

Rolleston's translation is as meticulous as the German original. This is the best study of Benjamin's life and times available.

Remarkably free of ideological restraints and interpretative hubris, [this book] is probably the best introduction to Benjamin's thought . . . available in English.