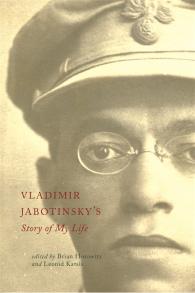 Vladimir Jabotinsky's Story of My Life

Vladimir Jabotinsky is well remembered as a militant leader and father of the right-wing Revisionist Zionist movement, but he was also a Russian-Jewish intellectual, talented fiction writer, journalist, playwright, and translator of poetry into Russian and Hebrew. His autobiography, Sippur yamai, Story of My Life—written in Hebrew and published in Tel Aviv in 1936—gives a more nuanced picture of Jabotinsky than his popular image, but it was never published in English. In Vladimir Jabotinsky’s Story of My Life, editors Brian Horowitz and Leonid Katsis present this much-needed translation for the first time, based on a rough draft of an English version that was discovered in Jabotinsky’s archive at the Jabotinsky Institute in Tel Aviv.

Jabotinsky’s volume mixes true events with myth as he offers a portrait of himself from his birth in 1880 until just after the outbreak of World War I. He describes his personal development during childhood and early adult years in Odessa, Rome, St. Petersburg, Vienna, and Istanbul, during Russia’s Silver Age, a period known for spiritual searching, but also political violence, radicalism, and pogroms. He tells of his escape to Rome as a youth, his return to Odessa, and his eventual adoption of Zionism. He also depicts struggles with rivals and colleagues in both politics and journalism. The editors introduce the full text of the autobiography by discussing Jabotinsky’s life, legacy, and writings in depth.

As Jabotinsky is gaining a reputation for the quality of his fictional and semi-fictional writing in the field of Israel studies, this autobiography will help reading groups and students of Zionism, Jewish history, and political studies to gain a more complete picture of this famous leader.

Brian Horowitz is Sizeler Family Chair Professor of Jewish Studies at Tulane University. His awards include an Alexander Von Humboldt Fellowship and a Yad Hanadiv Award. He is author of many books, including Russian Idea—Jewish Presence, Empire Jews, and Jewish Philanthropy and Enlightenment in Late-Tsarist Russia.


Leonid Katsis is distinguished professor of Russian and Jewish literature at Moscow State University for the Humanities. His many books include studies of Osip Mandelshtam, Boris Pasternak, The Mendel Beilis Blood Libel, and a new study of Vladimir Jabotinsky in Russia. He is also an editor of Jewishness in Russian Culture and Jabotinsky and Russia.

Experiencing an iconic historical figure like Vladimir Jabotinsky in his own words is a promising prospect,
and this first English publication of his Story of My Life offers the English reader just that.

This first English edition of Jabotinsky’s Story of My Life, an autobiography dealing with the years from his youth down to the entry of Turkey into the First World War which initiated a new stage in his political activity, has been painstakingly edited and furnished with a valuable introduction by Brian Horowitz. A crucial document in the history of Zionism, it will be essential reading for all those interested in Russian Jewish life at the turn of the century and in modern Jewish history.

– Antony Polonsky, professor emeritus at Brandeis University and chief historian at the Museum of the History of Polish Jews, Warsaw

Brian Horowitz and Leonid Katsis have produced a first-rate English edition of Vladimir Jabotinsky's Story of my Life. Jabotinsky's "self-fashioning" in this autobiography has been analysed and commented upon by scholars, but now readers without access to the Hebrew original can grapple with this fascinating text on their own. This is a crucial work in modern Jewish political and cultural history, with important (if enormously complex) resonances in contemporary Jewish affairs in Israel and the Diaspora. I recommend it for both scholarly and lay audiences.

While Jabotinsky’s full life has been covered in a number of biographies, Story of My Life is a must read for anyone seeking to understand his early years. Good for the editors who saw the English version to publication.

. . . this new edition of Story of My Life will be of interest to those who are following the recent mini-renaissance of Jabotinsky studies . . .

We owe the editors a debt for allowing us to witness Jabotinsky's mind at work.