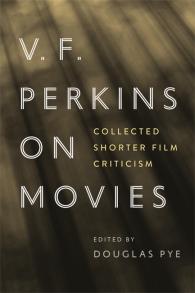 Victor Perkins (1936–2016) was a foundational figure for the study of film both as a writer and as an educationalist and teacher who played a key role in establishing film within British higher education. Best known for his 1972 book Film as Film, Perkins has a worldwide reputation within film studies that has been enhanced in recent years by the interest among emerging scholars in the practices of detailed film criticism. His extensive writing in journals and edited collections, spanning sixty years, is less well known, despite its importance and quality, partly because much of it was published in small magazines with limited distribution. V. F. Perkins on Movies: Collected Shorter Film Criticism, edited by Douglas Pye, makes it possible to see his writing as a coherent body of work, developed over a long career, and to appreciate its great historical and cultural significance.

Part 1 of the book covers Perkins’s early articles from 1960 to 1972, showing the emergence of ways of thinking about criticism and movies that remained constant throughout his career. Perkins was one of a small group of British writers who pioneered the serious and systematic discussion of Hollywood cinema. Beginning at the University of Oxford in the pages of Oxford Opinion, and then in Movie, the journal they established in 1962, these writers mounted a sustained critique of established writing on film, arguing for a criticism rooted in the detailed decisions that make up the complex texture of a film. The work Perkins published in the 1980s and beyond, which makes up part 2 of this volume, was resolute in upholding his critical values. It elaborated his approach in studies of individual movies and their makers and also reflected on major critical and conceptual issues, while maintaining his lifelong commitment to writing accessibly in ordinary language.

V. F. Perkins on Movies gives unimpeded access to one of the most distinctive and distinguished of critical voices and will be widely welcomed by academics, students of film, and informed film enthusiasts.

Douglas Pye is senior visiting research fellow in the Department of Film, Theatre & Television at the University of Reading. His publications include The Long Take: Critical Approaches and Style and Meaning: Studies in the Detailed Analysis of Film (both co-edited with John Gibbs), 100 Film Musicals (with Jim Hillier), and Movies and Tone. He co-edits the series Palgrave Close Readings in Film and Television and is a member of the editorial board of Movie: A Journal of Film Criticism.

Victor Perkins carved a unique path as a film critic. He was neither a reviewer nor a reporter; neither a polemical iconoclast nor a follower of academic fashion. His aim was clear, true, and steadfastly maintained: to understand the art of film, and the work of its finest artists, better.

The idea of gathering all of Perkins’s shorter pieces into one volume is excellent. In my judgment, he is one of the absolutely indispensable critics of film. He was a legendary teacher, and all his criticism has the capacity to educate even sophisticated filmgoers in how to think more cogently about movie art as moral and emotional experience, and how to read films with greater precision and discrimination. Douglas Pye has provided a valuable overview of the phases of Perkins’s career and offers a first-rate assessment of his major preoccupations and strengths.

Since film studies became an academic field, no one has attended to movies with more care and insight than Victor Perkins, and no one has so inspiringly and effectively taught several generations of students and readers to attempt the same. The full range of his achievement is on view in V.F. Perkins on Movies, from his theoretical work to his critical studies. Anyone with any sort of interest in film owes a great debt of gratitude to Douglas Pye for making these powerful essays accessible.

– Robert B. Pippin, The University of Chicago

Douglas Pye has performed a great service by putting together this indispensable collection of V. F. Perkins’s writings and introducing it so eloquently. The tyrannical reign of theoretical systematizing, which for decades led academic film studies to subordinate criticism to what the field called ‘theory,’ has ended. But to move forward, the field must now visit its origins and history. Victor Perkins, perhaps the most brilliant, the most rigorous and perceptive writer of film criticism we have ever had, trusted the films he loved to teach him how to think about them, without letting some theory or other blind him to his own experience. He took the best popular movies to be exemplary of the art of film and stuck to his guns when academic film studies embraced a theoretical orthodoxy and it became dogma that the kind of movies Perkins wrote about were pernicious ideological constructs, not works of art to be valued. And he kept faith with his conviction that the study of film cannot be a worthwhile human enterprise if it isolates itself from the kind of criticism that seeks to articulate a work’s idea—not a thought lying behind the work, but a thought the work expresses, in its own way, in its own medium—the kind of criticism Perkins never stopped writing—the kind of criticism whose value it is now more than ever incumbent upon the field to acknowledge.

– William Rothman, professor of cinematic arts at the University of Miami

Although [Perkins is] now gone, he’s left us a fine legacy in his writings. And this collection is a fitting monument to his memory.

– Tom Ryan, Screening the Past

V.F. Perkins (1936–2016) was a central figure in the evolution of film studies, and the assortment of essays gathered for V. F. Perkins on Movies certainly lives up to the book’s promotion as a collection making it "possible to see his writing as a coherent body of work, developed over a long career, and to appreciate its great historical and cultural significance."

It was this ability to blend steely certainty with an awareness of how tentative analysis must be that positioned Perkins as one of our finest thinkers on cinema, and makes the arrival of this anthology such a welcome event.

Belongs in the library of anyone interested in film as an art.

This book
will be of interest both to film scholars seeking an introduction to his work and to those
who know of Perkins through his Film as Film: Understanding and Judging Movies.

It's a sprawling, alternately fruitful and fitful complement to his more accessible 'Film as Film'.

4 hours 52 min ago
Happy Pub Date! HOUSE AND HOME is a collection of poems that intensely explore the beauty & wisdom to be found in w… https://t.co/MYnkKJxcrx
2 days 7 hours ago
Join WSU President M. Roy Wilson for a book talk next Wednesday! Copies of his memoir will be available for sale a… https://t.co/6q5w5dtFtu
4 days 7 hours ago
TONIGHT! Join @stephanie_heit at @ShopBooksweet for local author's night! https://t.co/pTny5OErDe