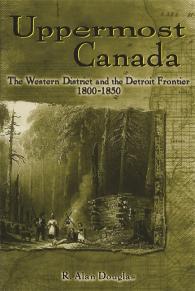 Uppermost Canada examines the historical, cultural, and social history of the Canadian portion of the Detroit River community in the first half of the nineteenth century. The phrase "Uppermost Canada," denoting the western frontier of Upper Canada (modern Ontario), was applied to the Canadian shore of the Detroit River during the War of 1812 by a British officer, who attributed it to President James Madison. The Western District was one of the partly-judicial, partly-governmental municipal units combining contradictory arisocratic and democratic traditions into which the province was divided until 1850. With its substantial French-Canadian population and its veneer of British officialdom, in close proximity to a newly American outpost, the Western District was potentially the most unstable. Despite all however, Alan Douglas demonstrates that the Western District endured without apparent change longer than any of the others.

R. Alan Douglas is founding curator of the Hiram Walker Historical Museum, now known as Windsor’s Community Museum. He is editor of John Prince 1796-1870, A Collection of Documents.