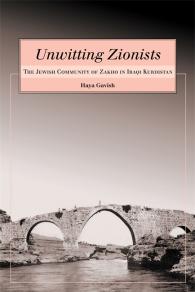 The Jewish Community of Zakho in Iraqi Kurdistan

Gavish has done remarkable work, collecting data from a large number of informants, studying it carefully and very ably reworking it from the point of view of three different disciplines: folklore, history, and anthropology.

Unwitting Zionists examines the Jewish community in the northern Kurdistan town of Zakho from the end of the Ottoman period until the disappearance of the community through aliyah by 1951. Because of its remote location, Zakho was far removed from the influence of the Jewish religious leadership in Iraq and preserved many of its religious traditions independently, becoming the most important Jewish community in the region and known as "Jerusalem of Kurdistan." Author Haya Gavish argues, therefore, that when the community was exposed to Zionism, it began to open up to external influences and activity. Originally published in Hebrew, Unwitting Zionists uses personal memoirs, historical records, and interviews to investigate the duality between Jewish tradition and Zionism among Zakho’s Jews.

Gavish consults a variety of sources to examine the changes undergone by the Jewish community as a result of its religious affiliation with Eretz-Israel, its exposure to Zionist efforts, and its eventual immigration to Israel. Because relatively little written documentation about Zakho exists, Gavish relies heavily on folkloristic sources like personal recollections and traditional stories, including extensive material from her own fieldwork with an economically and demographically diverse group of men and women from Zakho. She analyzes this firsthand information within a historical framework to reconstruct a communal reality and lifestyle that was virtually unknown to anyone outside of the community.

Appendixes contain biographical details of the interviewees for additional background.
Gavish also addresses the relative merits of personal memoirs, optimal interviewer-interviewee relationships, and the problem of relying on the interviewees’ memories in her study. Folklore, oral history, anthropology, and Israeli studies scholars, as well as anyone wanting to learn more about religion, commuity, and nationality in the Middle East will appreciate Unwitting Zionists.

Haya Gavish is lecturer in Hebrew language and literature at the Hebrew Union College–Jewish Institute of Religion, Jerusalem.

Well organized and carefully written, Unwitting Zionists is based on the massive body of oral history of a community that no longer resides in its native territory. This folkloristic and historical study is a fine example of local history based on personal testimonies and individual memories filled with insightful statements and nuanced anecdotes. It makes a significant contribution to the literature of the Jews of the Middle East during the precolonial and colonial periods.

Enhanced with appendices, extensive notes, an extended bibliography, and a comprehensive index, Unwitting Zionists: The Jewish Community of Zakho in Iraqi Kurdistan is an original and seminal work that is highly recommended for academic library Judaic History reference collections and supplemental reading lists."

Gavish has done remarkable work, collecting data from a large number of informants, studying it carefully and very ably reworking it from the point of view of three different disciplines: folklore, history, and anthropology.

34 min 13 sec ago
TONIGHT! Join @stephanie_heit at @ShopBooksweet for local author's night! https://t.co/pTny5OErDe
22 hours 17 min ago
Have you had a chance to check out our new Spring & Summer 2023 Catalog?! From a new lyric essay collection to a p… https://t.co/cNAo9WjL9K
1 day 20 hours ago
RT @shondabuchanan: Tonight! Feb. 1, 2023, 6:30pm Mountain Time -- Virtual reading for #lewisandclarklibrary Lewis & Clark Library in H… https://t.co/UAmMoIlq1w