Home » Books » Until the Full Moon Has Its Say 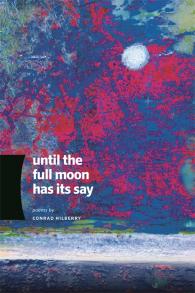 Until the Full Moon Has Its Say

The poems themselves exist by the grace of a momentary poise, a marriage of high good humor and an opening to grief. What a gift for a reader!

The poems in Until the Full Moon Has Its Say were inspired by the loss of poet Conrad Hilberry’s wife of fifty-six years, Marion. While the poems in this volume delve into the initial emptiness and hopelessness of grieving, the poet’s connections to the natural world, music, and other people ultimately bring him back into the present while still acknowledging and honoring the past. The work of a skilled poet with a lifetime of experience, this collection displays Hilberry’s mastery of form. The book’s three sections include a sonnet, five villanelles, and a variety of stanza structures, all written in his signature tone, which is contemplative, tender, and moving.

The elegant poems of Until the Full Moon Has Its Say arise from the consideration of ordinary, even humble, subjects—a bowl on a table, a blackout, mosquitoes, garlic mustard, algae on the local pond. Hilberry’s relaxed voice is wise and measured even in the depths of grief, as he muses, "How can I draw dead branches / in a poem?" Part of the answer to that question lies in the use of form, which gives shape to experience. In his formal virtuosity, Hilberry even writes a villanelle—a notoriously difficult poetic form—about writing a villanelle.

Written by the poet in his eighties, Until the Full Moon Has Its Say is a powerful reflection on mortality and on the art that has been his lifelong practice. All readers of poetry will treasure this powerful volume.

Conrad Hilberry is the author of ten previous books of poetry, including After-Music (Wayne State University Press, 2008), Player Piano, and Sorting the Smoke, which won the Iowa Poets’ Prize. His poems have appeared in Poetry, The New Yorker, The Hudson Review, Field and many other journals. Now retired, Hilberry has had a long career teaching literature and creative writing at Kalamazoo College.

In Conrad Hilberry’s masterful new collection, limbs have been stripped of flesh and foliage, leaving us poems of wood, of bone. The sky is ‘hung on a bare-branched oak.’ Birdsong has been winnowed down—‘no tune, no timing, just the metallic rasp.’ What persists is form itself, the villanelle, its rhymes and teeter-totting iambs becoming a frame for memory, even as it slips from the speaker’s grasp. ‘I let fall what I can’t hold onto anymore, what was and isn’t,’ Hilberry writes. The question at the hub of these poems is the same one we all hold at our center: What endures, when the sensual life and its echo—memory—have retreated, when the past has been ‘peeled to the bone’? The answer, enacted in this stunning, courageous collection, can only be poetry. Poetry lasts.

The virtuosic hand behind these poems—stark meditations on memory, loss, and the dark side of our animal nature—moves and turns in angles that weigh down each brief poem in the collection, a collage of feathers pasted to a stone. I am a longtime follower of Hilberry's work; I have never seen it so agile and unrelenting, bearing such enormous themes through the flute-space of the line, like his ‘blackbird on a branch / long story caught in his throat.’ It is a brilliant book by a master of the craft.

Elegant, sure, deceptively straightforward, Conrad Hilberry’s poetry engages the biggest questions with rare grace, even curiosity. Grief is a familiar companion and while these are poems of relinquishing, not once do they lose sight of the larger landscape. They will break your heart then heal it.

As I read these extraordinary poems by Conrad Hilberry, I kept thinking of Basho’s idea that a haiku should contain sabi, an emotional alloy composed of beauty and sadness. The poems in Until the Full Moon Has Its Say are veined through with sabi as they welcome such subjects as aging, the death of a beloved, and the presence of passion in its many guises. The poems themselves exist by the grace of a momentary poise, a marriage of high good humor and an opening to grief. What a gift for a reader! The Japanese honor as national treasures their elder artists if they manage to become both masters-in-the-craft and masters-of-the-heart. If we did the same, Conrad Hilberry would surely be at the top of our list.

2 days 59 min ago
Now a National Jewish Book Award Finalist! @JewishBook https://t.co/qTKAeUEPVX
2 days 4 hours ago
RT @Steph_Steinberg: Tomorrow @ 7 p.m.! Join me and @DETWritingRoom at The Whitney for our first #2023AuthorSeries event ft. @waynestate… https://t.co/pssbi2NLNs
6 days 5 hours ago
SAVE THE DATE! Join author Desiree Cooper and illustrator Bec Sloane this Saturday for a behind the scenes look at… https://t.co/cKDBmbewOa