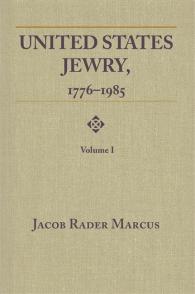 Volume I focuses on the American revolution and the early national period, from 1776 to 1840. Marcus examines the role played by Jews in the revolution and discusses important historical and social themes such as politics, commerce, religion, Jewish and American culture, anti-Jewish prejudices, and the phenomenon of assimilation.