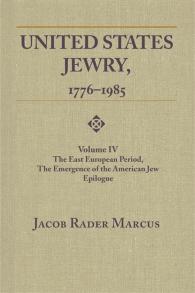 Volume 4, The East European Period, The Emergence of the American Jew Epilogue

In the fourth and final volume of this set, Marcus deals with the coming and challenge of the East European Jews from 1852 to 1920. He explores settlement and colonization, dispersal to rural areas, life in large cities, the proletarians, the garment industry, the unions, and socialism. He also describes the life of the middle and upper class East European Jew. Special attention is paid to the growth of Zionism. In the epilogue, Marcus writes about the evolution of the "American Jew."

13 hours 4 min ago
DETROIT BOOK OF THE DAY: DAY 1 THE DETROIT SYMPHONY ORCHESTRA details the history of the @DetroitSymphony as seen… https://t.co/7zpUnVRwiw
1 day 7 hours ago
In honor of the #CityofDetroit turning 321 years old on July 24th, WSUPress will be showcasing one Detroit Book of… https://t.co/PA7nONh4C0
1 day 12 hours ago
OUR FALL & WINTER 2022 TITLES ARE NOW AVAILABLE FOR PRE-ORDER! Grab your copy of any of our fall & winter titles f… https://t.co/qDykAsF9sk