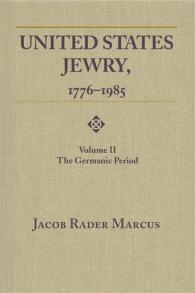 The second volume of this seminal work on American Jewry covers the period from 1841 to 1860. Unlike the early Jewish settlers, these immigrants were Ashkenazim from Europe’s Germanic countries. Marcus follows the movement of these "German" Jews into all regions west of the Hudson River.