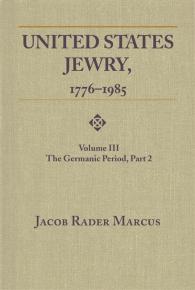 The third volume covers the period from 1860 to 1920, beginning with the Jews, slavery, and the Civil War, and concluding with the rise of Reform Judaism as well as the increasing spirit of secularization that characterized emancipated, prosperous, liberal Jewry before it was confronted by a rising tide of American anti-Semitism in the 1920s.