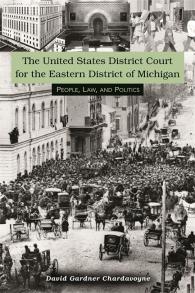 The United States District Court for the Eastern District of Michigan

In chronological order, Chardavoyne charts the history of the court, its judges, and its major cases in five parts: The Wilkins Years, 1837 to 1870; The Industrial Revolution and the Gilded Age, 1870 to 1900; Decades of Tumult, 1900 to 1945; The Era of Grand Expectations, 1946 to 1976; and A Major Metropolitan Court, 1977 to 2010. Along the way, Chardavoyne highlights many issues of national concern faced by the court, including cases dealing with fugitive slave laws, espionage and treason, civil rights, and freedom of speech. Chardavoyne also examines how conflicting interests—political, local, and personal—have influenced the resolution of a myriad of issues not directly related to the court’s cases, such as who becomes a federal judge, how many judges the court should have, in which cities and in which buildings the judges hold court, what kinds of cases the judges can and cannot hear, and the geographical boundaries of the district and of divisions within the district.

This volume includes helpful appendixes that list the Eastern District of Michigan Court’s Chief Judges, Clerks, Magistrates and Magistrate Judges, and United States Marshals; along with the succession of judges, and a list of District and Circuit Court Case Filings, 1837–2010. Legal professionals and scholars will appreciate this thorough history.

David G. Chardavoyne is a veteran Michigan lawyer and a legal educator who teaches at Wayne State University Law School and the University of Detroit–Mercy School of Law. He is the author of A Hanging in Detroit: Stephen Gifford Simmons and the Last Execution Under Michigan Law (Wayne State University Press, 2003), and he contributed a chapter to The History of Michigan Law, both of which were named Michigan Notable Books by the Library of Michigan. He is also a frequent contributor to The Court Legacy, the journal of the Historical Society for the United States District Court for the Eastern District of Michigan.

The United States District Court for the Eastern District of Michigan will be a valuable reference. It contains an extensive history of the court's personnel and relatively detailed biographies of all the judges except those most recently appointed. The appendices list all the clerks of court, magistrates, and magistrate judges, and U.S. Marshals, as well as the jduges and chief judges. . . . The book contains numerous photos, including those of the judges and many of the courthouse as they were built or remodeled. It should be a welcome addition to any legal history collection...

Advances our understanding that the work of the federal courts was not monolithic but varied significantly across districts because of local needs and interests."

– Eric Rise, associate professor in the Department of Sociology and Criminal Justice at the University of Delaware

...these histories not only discuss not only the institutional history of the courts and the character of their judges and other personnel, but they also explain the legal doctrines and precedents that govern areas of law, how the district judges applied those doctrines and precedents and helped to develop them, the social, economic, and political context in which they acted, and how their decisions affected their communities and were affected by community interests and social realities.

12 hours 46 min ago
DETROIT BOOK OF THE DAY: DAY 1 THE DETROIT SYMPHONY ORCHESTRA details the history of the @DetroitSymphony as seen… https://t.co/7zpUnVRwiw
1 day 7 hours ago
In honor of the #CityofDetroit turning 321 years old on July 24th, WSUPress will be showcasing one Detroit Book of… https://t.co/PA7nONh4C0
1 day 12 hours ago
OUR FALL & WINTER 2022 TITLES ARE NOW AVAILABLE FOR PRE-ORDER! Grab your copy of any of our fall & winter titles f… https://t.co/qDykAsF9sk