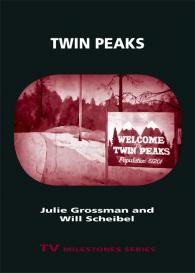 Julie Grossman and Will Scheibel

Julie Grossman and Will Scheibel’s enthusiastic book on the television series Twin Peaks takes fans through the world that Mark Frost and David Lynch created and examines its impact on society, genre, and the television industry. Grossman and Scheibel explore the influences of melodrama and film noir, the significance around the idea of "home," as well as female trauma and agency. In addition to this close investigation of the series itself, the authors examine the rich storytelling surrounding Twin Peaks that includes the film prequel, Mark Frost’s novels, and Showtime’s 2017 revival. In Twin Peaks, Grossman and Scheibel argue that the show has transcended conventional binaries not only in film and television but also in culture and gender.

The book begins with a look into the publicity and critical discourses on authorship that framed Twin Peaks as an auteurist project rather than a prime-time soap opera. Despite critics’ attempts to distance the series from the soap opera genre, Grossman and Scheibel explore how melodrama and noir are used in Twin Peaks. Grossman and Scheibel masterfully examine star performances in the series including Kyle MacLachlan’s epic portrayal as the idiosyncratic Special Agent Dale Cooper and Sheryl Lee’s haunting embodiment of Laura Palmer. The monograph finishes with an examination of the adaptation and remediation of Twin Peaks in a variety of different platforms, which have further expanded the boundaries of the series.

Twin Peaks explores the ways in which the series critiques multiple forms of objectification in culture and textuality. Readers interested in film, television, pop culture, and gender studies as well as fans and new audiences discovering Twin Peaks will embrace this book.

Julie Grossman is professor of English and communication and film studies at Le Moyne College in Syracuse, New York. Her books include Rethinking the Femme Fatale in Film Noir: Ready for Her Close-Up; Literature, Film, and Their Hideous Progeny: Adaptation and ElasTEXTity; and Ida Lupino, Director: Her Art and Resilience in Times of Transition (with Therese Grisham). She is co-editor with R. Barton Palmer of the book series Adaptation and Visual Culture and the collection Adaptation in Visual Culture: Images, Texts, and Their Multiple Worlds.

Will Scheibel is associate professor in the Department of English at Syracuse University, where he teaches film and screen studies, and is affiliated with the Goldring Arts Journalism Program. He is the author of American Stranger: Modernisms, Hollywood, and the Cinema of Nicholas Ray and, with Steven Rybin, co-editor of Lonely Places, Dangerous Ground: Nicholas Ray in American Cinema.

In this very smart book, Grossman and Scheibel draw upon their expertise in matters of performance, gender, and genre to brilliantly tap into the ‘electricity’ that charges and animates Twin Peaks and its remarkable Return. Like ‘a damn fine cup of coffee’ this book stimulates and satisfies in equal measure.

This is a wonderfully written and effortlessly rich book. It is illuminatingly detailed at the same time as it broadens the series and its Return through a wealth of film and media historical references. Indeed an inspiring venture into the Twin Peaks and its Return universe—notably an insightful take on the discussion of gender in Lynch and the female characters in Twin Peaks.

This book is one of the first to investigate all of the Twin Peaks universe, including the recent Showtime series and the many paratexts spiraling from it. Julie Grossman and Will Scheibel create an accessible and vital work that reestablishes how significant this series continues to be in the history of television.

The handiest and most encompassing look at the Twin Peaks phenomenon to date.

There’s a brand-new book about Twin Peaks that captures some magical resonances between various sets of two worlds. Published as part of the TV Milestones Series at Wayne State University Press, Twin Peaks, by Julie Grossman and Will Scheibel, delivers a compact presentation of academically rigorous research and analysis written that is accessible and compelling for curious non-academic audiences. Whether you’re an aficionado of the series Twin Peaks or keen to explore milestone developments in television, this book will enchant and enlighten you.

Grossman and Scheibel explore blurrings and categorical confusions. If I have to take a side in the ironic clash between binaristic art/commerce and liminal complexity, as Fox Mulder might argue, it’s in the complicated latter that I want to believe.

That the authors have found a fresh approach to a series that is 30 years old is noteworthy
and prompts a reappraisal of, not only the much derided season two of Twin Peaks, but
the critically scorned Twin Peaks: Fire Walk With Me.

15 hours 9 min ago
Wayne State University President M. Roy Wilson with his teacher in high school. Check out this image and many more… https://t.co/W3kp1D7dFX
1 day 15 hours ago
HAPPY PUB DATE! Dan Gerber said "If you make yourself available to Cindy Hunter Morgan’s poems, they will revivif… https://t.co/L60dTqsUUj
2 days 11 hours ago
Grab your copy or e-book of @fkwang's YOU CANNOT RESIST ME WHEN MY HAIR IS IN BRAIDS today! https://t.co/htFDjNa9yj https://t.co/zHyt049441