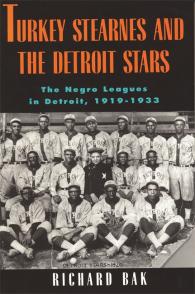 Turkey Stearnes and the Detroit Stars

A must read for fans of baseball and for all Americans.

In recalling the early part of this century in baseball history, casual fans tend to glorify legends like Ty Cobb and Babe Ruth. While these remarkable players dazzled fans and grabbed headlines, black players who were every bit as good went unnoticed outside the Negro leagues. Because a "gentleman's agreement" among the white owners of organized baseball banned blacks from the major and minor leagues from the 1880s through 1946, the Negro National League provided black players the sole opportunity to display their talent.

In Turkey Stearnes and the Detroit Stars, Richard Bak documents the extraordinary history of Detroit's first and foremost black professional baseball team. This groundbreaking analysis of Detroit's entry in the Negro National League brings to life a fascinating story of skill, pride, and perseverance.

As a charter member of Andrew "Rube" Foster's National Negro League, the Detroit Stars quickly evolved into an integral part of black culture. From the team's beginning in 1919 to its demise in 1933, the Stars offered Detroit's black community entertainment and a short respite from the hardships of daily life. Moreover, the Detroit Stars represented a rare example of successful black entrepreneurship.

The greatest Star of them all was Norman "Turkey" Stearnes, the brilliant longball-hitting center fielder. Stearnes established virtually all of the team's individual and career records during his nine seasons with Detroit.

Richard Bak is a freelance writer and is the author of Cobb Would Have Caught It (1991), and A Place for Summer (1998) both published by Wayne State University Press.

– Bruce Chadwick, author of When the Game Was Black and White