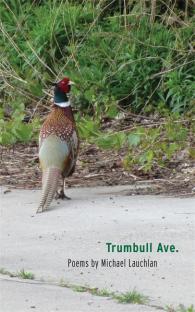 Trumbull Ave. is a brilliant book—read it aloud and it will sing for you.

The well-crafted lines in Michael Lauchlan’s Trumbull Ave. are peopled by welders, bricklayers, gas meter readers, nurses, teachers, cement masons, and street kids. Taken together, they evoke a place—Detroit—in its bustling working-class past and changeable present moment. Lauchlan works in the narrative tradition of Robert Frost and Edwin Arlington Robinson but takes more recent influence from Philip Levine, Thomas Lux, and Ellen Voigt in presenting first- and third-person meditations on work, mortality, romance, childish exuberance, and the realities of time.

Lauchlan presents snapshots from the past—a widowed mother bakes bread during the Depression, a welder sends his son to war in the 1940s, a bounding dog runs into a chaotic street in 1981, and a narrator visits a decaying Victorian house in 1993—with an impressive raw simplicity of language and a regular, unrhymed meter. Lauchlan pays close attention to work in many settings, including his own classroom, a plumber’s damp cellar, a nurse’s hospital ward, and a waitress’s Chinese restaurant dining room. He also astutely observes the natural world alongside the built environment, bringing city pheasants, elm trees, buzzing cicadas, starry skies, and long grass into conversation with his narrators’ interior and exterior landscapes.

Lauchlan’s poems reveal the layered complexity of human experiences in vivid, relatable characters and recurrent themes that feel both familiar and serious. All readers of poetry will enjoy the musical and vivid verse in Trumbull Ave.

Michael Lauchlan’s poems have appeared in many publications and have been anthologized in Abandon Automobile (Wayne State University Press, 2001) and A Mind Apart. His earlier collections are And the Business Goes to Pieces and Sudden Parade.

I have waited a long time for this book. I don't think there’s another poet who has written so deeply into the bone marrow of a city, his city, Detroit, which he loves. He’s also a poet who can use a word like ‘tetragrammation’ with perfect ease. This is the poetry of a grown man who has never abandoned the ideals (justice, for example) and the joyful passions of a young man. Trumbull Ave. is a brilliant book—read it aloud and it will sing for you.

Trumbull Ave. brilliantly evokes the harsh realities of a city and the lives of its people, working, struggling, loving. These are poems that matter; with Lauchlan’s passionate restraint, they also sing. This book both honors the poetic tradition and makes it proud.

Michael Lauchlan’s Trumbull Ave. brilliantly represents ‘that broad anvil of Detroit,’ each poem an illumination of his city’s times and places, and the generations of people who have lived, and live, in them. With the observational sharpness of Elizabeth Bishop and William Carlos Williams, and an emotional power equal to the sounds of John Coltrane, Trumbull Ave. portrays our deepest human truths.

– Lawrence Joseph, author of Into It