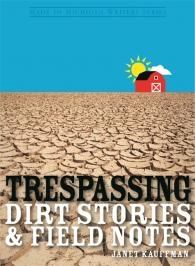 A remarkable fusion of art and advocacy, Trespassing's beauty and power stem from its south central Michigan locale, but its consequence and merit know no bounds.

Trespassing is composed in equal amounts of short fiction and essays that illustrate the impact of modern factory farms—confined animal feeding operations (CAFOs)—on a rural Michigan community. Michigan author Janet Kauffman debunks the myth of the idyllic "clip art" farm of decades past by giving readers a close-up look at mega-meat and mega-milk, the extreme amounts of animal waste and barren countryside CAFOs produce, and the people who live in the midst of this new rural landscape threatened by agricultural sprawl. Trespassing considers the consequences of violating nature’s limits, giving readers a vivid impression of the irreversible damage that violation causes to our habitat.

The writings in Trespassing range from ground-level realism to hallucinatory surrealism, from mindful discussion to poetic incantation, from vehicles of outrage to portraits of grief. The rural landscape includes a range of characters, and Kauffman’s stories and essays are populated with CAFO owners, immigrant workers, neighbors mired in pollution, greenhouse growers, environmental activists, water monitors, drain commissions, and agency officials. As a resident of rural Michigan and part of a farming family herself, Kauffman approaches the subject matter with a sensitive and informed eye. Her detailed writings take readers into this landscape of modern rural communities to experience the smells, sounds, and sights of a brutally changed world.

Those interested in environmental issues, as well as fellow Michiganders, and fans of creative fiction and nonfiction will appreciate this moving and informative collection.

Janet Kauffman is professor of English at Eastern Michigan University. She is the author of three books of short stories, Characters on the Loose, Obscene Gestures for Women, and Places in the World a Woman Could Walk, which won the Rosenthal Award from the Academy–Institute of Arts and Letters; three novels in the trilogy Flesh Made Word: Collaborators, The Body in Four Parts, and Rot; and four collections of poems, including The Weather Book, which was an AWP Award Series Selection, and Five on Fiction.

In Trespassing Janet Kauffman has found a new form of literature and of advocacy: she combines environmental essays of description, narration, and the history of assaulted watersheds with short stories that imagine the lives of the people who live most intimately with these assaults. The result is eloquent rage and despair, always tempered by a deep love for her southern Michigan landscape and even by the tenuous possibility of hope.

– Keith Taylor, author of Guilty at the Rapture and If the World Becomes So Bright

With heart and mind Janet Kauffman writes of the land rape perpetrated by industrial agriculture in the region where she farms. A remarkable fusion of art and advocacy, Trespassing's beauty and power stem from its south central Michigan locale, but its consequence and merit know no bounds.

Janet Kauffman's eloquent musings and tales about the importance of water and community make a powerful narrative. While entertaining us, she also challenges us to awaken to the life-giving value of precious streams and rivers as a central characteristic of what we call and love as home.

– Dave Dempsey, former environmental aide to Michigan governor James Blanchard and award-winning author of On the Brink: The Great Lakes in the 21st Century

The force that through the green fuse drives the flower' drives Janet Kauffman's pure green rage in this great, grave book of purposeful prose. Kauffman innovates, hybridizes, intuits, makes new not like God but like the humane human she is. 'The force that drives the water through rocks' does indeed also drive her red blood and her black, cleansing, sighted, and insightful quenching ink.

– Michael Martone, author of The Flatness and Other Landscapes and Racing in Place

Trespassing: Dirt Stories and Field Notes is highly recommended for anyone concerned about animal rights and a good pick for any community library environmental studies shelf."