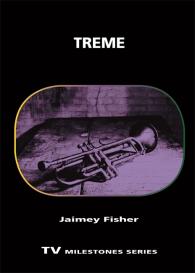 In Treme, Jaimey Fisher analyzes how the HBO television series Treme (2010–13) treads new ground by engaging with historical events and their traumatic aftermaths, in particular with Hurricane Katrina in 2005 and subsequent flooding in New Orleans. Instead of building up to a devastating occurrence, David Simon’s much anticipated follow-up to The Wire (2002-08) unfolds with characters coping in the wake of catastrophe, in a mode that Fisher explores as "afterness." Treme charts these changes while also memorializing the number of New Orleans cultures that were immediately endangered.

David Simon’s and Eric Overmyer’s Treme attempts something unprecedented for a multi-season series. Although the show follows, in some ways, in the celebrated footsteps of The Wire—for example, in its elegiac tracking of the historical struggles of an American city—Fisher investigates how Treme varies from The Wire’s work with genre and what replaces it: The Wire is a careful, even baroque variation on the police drama, while Treme dispenses with genre altogether. This poses considerable challenges for popular television, which Simon and Overmyer address in several ways, including by offering a carefully montaged map of New Orleans and foregrounding the distance witnessing of watershed events there. Another way in which Treme sets itself apart is its memorialization of the city’s inestimable contributions to American music, especially to jazz, soul, rhythm and blues, rap, rock, and funk. Treme gives such music and its many makers unprecedented attention, both in terms of screen time for music and narrative exposition around musicians. A key element of the volume is its look at the show’s themes of race, crime, and civil rights as well as the corporate versus community recovery and remaking of the city.

Treme’s synthesizing mélange of the arts in their specific geographical context, coupled with political and socio-economic analysis of the city, highlights the show’s unique approach. Fans of the works of Simon and Overmyer, as well as television studies students and scholars, will enjoy this keen-eyed approach to a beloved show.

Jaimey Fisher is professor of German and cinema and digital media and director of the UC Davis Humanities Institute at the University of California, Davis. He is the author of Christian Petzold and Disciplining Germany: Youth, Reeducation, and Reconstruction after the Second World War (Wayne State University Press, 2007). He edited the volume Generic Histories of German Cinema: Genre and its Deviations and has also co-edited The Berlin School and its Global Contexts: A Transnational Art Cinema (Wayne State University Press, 2018), among other edited volumes.

The book deftly weaves together discussion of the musical heritages and generational tensions explored in the series with the personal histories of several of the characters, which are based on actual persons. It’s clear that Fisher has a genuine knowledge and appreciation of the aesthetic distinctiveness of New Orleans and the series Treme.

Although it didn’t find a very large or long-lasting audience when it originally aired, Treme is a show of great sociological, political, cultural, historical, and aesthetic interest, and it is sure to be watched, studied, and written about for years to come. This book presents a large amount of sociopolitical background and artistic analysis that both scholarly and general viewers should find valuable. It is especially worthwhile in such areas as the show’s treatments of music and food and in its discussions of ‘distance-witnessing’ and ‘afterness.’

Finished Jaimey Fisher's invigorating TV Milestone on Treme. The book offers great context for thinking about series in conjunction with all the other "quality TV" of the 2010s. Fisher uses Treme to explore how New Orleans was reshaped culturally and spatially by "disaster capitalism" and notes that it is one of the few shows to depict effects of neoliberal policy. Fisher's book also excels in celebrating how Simon sought to craft a new form of TV that celebrates and mourns New Orleans.