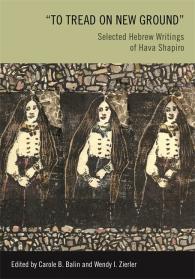 "To Tread on New Ground"

Edited by Carole B. Balin and Wendy I. Zierler

Hava Shapiro is among the nearly forgotten Jewish women writers who sought acceptance in Jewish literary circles of the last century. Born in Slavuta (modern-day Ukraine) in 1878, she published works of fiction, memoir, literary criticism, and journalism, including a volume of short fiction and a scholarly monograph on the Czech leader Masaryk. Her handwritten diary—the first known diary to be kept by a woman in Hebrew—evokes not only the momentous events of her day but also the experiences of women like herself who failed to follow the dictates of Jewish tradition and aspired to roles beyond those of wife and mother.

In "To Tread New Ground": Selected Writings of Hava Shapiro, editors and translators Carole B. Balin and Wendy I. Zierler present an English anthology of Shapiro’s late-nineteenth- and early-twentieth-century Hebrew writings. The selection culls from her short fiction, feminist literary criticism, reportage and literary essays, as well as her diary and hundreds of letters. Shapiro chronicled, publicly and privately, such cataclysmic events as the Russian Revolution and both World Wars in addition to critical episodes in the Jewish past, including pogroms, mass migration, ruptures in traditional Jewish life, and the development of Zionism. A list of Shapiro’s intimates, whom she describes in both her diary and published reminiscences, reads like a "who’s who" of the Russian Haskalah, including Y. L. Peretz, Reuven Brainin, David Frischmann, Nahum Sokolov, Micha Yosef Berdischevsky, and Hayim Nahman Bialik. To further contextualize Shapiro’s writings, Balin and Zierler include a thorough introduction and translations of critical essays about Shapiro.

Balin and Zierler’s Hebrew edition of Shapiro’s writing, Behikansi atah, which was published in Israel in 2008, brought the first broad attention and readership to Shapiro’s remarkable biography and writings. The translations in "To Tread New Ground," which include previously uncollected materials, will be welcomed by English-speaking readers interested in Hebrew literature, East European Jewish history, and gender studies.

Wendy I. Zierler is Sigmund Falk professor of modern Jewish literature and feminist studies at Hebrew Union College-Jewish Institute of Religion in New York. She is the author of And Rachel Stole the Idols: The Emergence of Modern Hebrew Women’s Writing (Wayne State University Press, 2004), co-editor with Carole B. Balin of Behikansi atah [Selected Works by Hava Shapiro], and has written numerous articles and essays in the fields of modern Jewish literature and Jewish feminist studies, including a feminist Haggadah commentary included in My People’s Passover Haggadah, edited by Hoffman and Darnow.

Carole B. Balin is professor of Jewish history at Hebrew Union College-Jewish Institute of Religion, New York. Seen nationally on the PBS documentary "The Jewish People: A Story of Survival," she is the author of To Reveal Our Hearts: Jewish Women Writers of Tsarist Russia and co-editor of Behikansi atah [Selected Works by Hava Shapiro] with Wendy I. Zierler, as well as Sisterhood: A Centennial History of Women of Reform Judaism with Dana Herman, Jonathan D. Sarna, and Gary P. Zola. She co-curated "Bat Mitzvah Comes of Age," a traveling exhibit of the National Museum of American Jewish History and Moving Traditions.

‘To Tread on New Ground’ will win Hava Shapiro a well-deserved place on the literary and cultural map, something earned but not attained in her lifetime. The editors are to be congratulated for the combination of detective work and literary criticism necessary to this project and for the elegant translations that bring Shapiro to an Anglophone audience.

To say that ‘To Tread on New Ground’ is groundbreaking would be an understatement. The volume presents Hava Shapiro’s unjustifiably forgotten Hebrew writings in beautiful English translation and puts it within the relevant historical and literary contexts. Balin and Zierler unveil Shapiro as a diasporic Jewish woman writer negotiating multiple genres and identities, a master of self-invention in a time of profound upheavals.

– Shachar Pinsker, associate professor of Hebrew literature and culture at the University of Michigan

Carole Balin and Wendy Zierler’s marvelous translation and edition of the works of the all-but-forgotten Hebrew writer Hava Shapiro is an exciting contribution to the study of modern Hebrew literature, modern Jewish literature, Jewish women's history, and modern Jewish studies as a whole. The translations are fluid, the selections excellent, the contextualization spot-on. This volume will be highly useful in classrooms throughout Jewish studies and to general readers interested in all facets of modern Jewish culture.

Professors Carole Balin and Wendy Zierler, both at Hebrew Union College Jewish Institute of Religion in New York College, combine their expertise in Jewish history and in Jewish literature and feminist studies respectively, to provide a new, unique, powerful insight into the vanished Jewish life and Jewish press of Europe.

This is a comprehensive volume about an important writer, one that shows the range of her work and some of the ways the challenges she faced in her lifetime influenced what she produced in print.