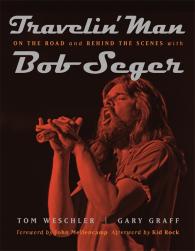 On the Road and Behind the Scenes with Bob Seger

Tom Weschler spent more than ten years from the late 1960s through the 1970s in the Bob Seger camp, working as tour manager and photographer during Seger’s hard-gigging, heavy-traveling, reputation-making early days. Weschler’s behind-the-scenes photographs document the frustrations and triumphs of recording, performing, songwriting, and building the Seger empire before the breakthroughs of Live Bullet and Night Moves. Travelin’ Man collects Weschler’s early photos with additional images leading into the present. Weschler and award-winning music journalist Gary Graff annotate the images with Weschler’s recollections of the events and Graff provides additional background on Seger’s career in an introduction, timeline, and cast of characters section.

Weschler’s photographs and stories pull back the curtain on seldom-seen aspects of Seger’s career, including time in the studio recording Mongrel, early struggles to get radio airplay, and small shows at schools and shopping malls. Weschler captures Seger’s personality on stage and at home and reveals the colorful personalities of those people he worked and performed with, including Alice Cooper, Bruce Springsteen, Glenn Frey, and KISS. He takes readers inside Seger headquarters in Birmingham, Michigan, and practice space in Rochester, Michigan, introducing them to renowned manager Punch Andrews and the various members of Seger’s bands. Weschler’s photos feature highlights like Seger’s show at the Pontiac Silverdome in 1976, his first gold record in 1977, the first meeting between Seger and Bruce Springsteen in 1978, and Seger’s induction to the Rock and Roll Hall of Fame in 2004.

Travelin’ Man also contains art from eight Seger album covers that Weschler designed, a foreword by John Mellencamp, an afterword by Kid Rock, and a comprehensive discography. Seger fans and readers interested in music and biography will enjoy the one of a kind story in Travelin’ Man.

Tom Weschler is a photographer living and working in metropolitan Detroit. He has been photographing musical events since 1964 when at age fifteen he photographed the Beatles first American television appearance on The Ed Sullivan Show in his bedroom.

Gary Graff is an award-winning music journalist based in Detroit whose work appears regularly in numerous publications, including Billboard, the New York Times Features Syndicate, UPI, the Oakland Press, Revolver, Red Flag Media, and GrokMusic.com. He also reports on music news for WCSX in Detroit, WHQG in Milwaukee, and Radio 106.7 in Columbus, Ohio. He is the founding editor of the MusicHound Essential Album Guide series and editor of The Ties That Bind: Bruce Springsteen A to E to Z.

True insights into Bob Seger's lengthy career are a rare thing. That is remedied in Travelin' Man. Tom Weschler and Gary Graff respectfully bring light and vision to an artist and an era that deeply deserves a closer look."

– Howard Kramer, <!--StartFragment--> curatorial director of the Rock and Roll Hall of Fame and Museum <!--EndFragment-->

Travelin' Man is the result not only of Weschler's access to Seger, but of a decades-long friendship that earned Seger's trust. From shots at the Rochester farm on Tienken Road that Seger and crew rented in the '70s to images of Bruce Springsteen coming backstage at a Pine Knob show in '78 – photographed exclusively by Weschler – this homage will be welcomed by fans starved by the dearth of Seger biographical material."

Weschler's ability to capture the essence of Seger's early career in photographs makes the book a valuable source of visual information about both the artist and the Midwestern influences on his career…its authors' personal recollections make it accessible to any reader interested in the history of rock 'n' roll."

With a foreword by John Mellencamp, an afterword by Kid Rock, commentary by noted rock journalist Gary Graff and more than 150 photos, Travelin' Man presents a unique insider's view of one of rock 'n' roll's hardest-working, hit-making musical icons on his trajectory to superstardom."

Travelin' Man is a warm-hearted and revealing look at the career of Detroit hometown hero Bob Seger-documented by a talented photographer who's been with him from the beginning and a respected Detroit writer who knows every bit of the local story."

This fan-mentality aspect of the book is a most appealing feature, with shots from behind the stage and behind the scenes at concerts that many Michigan music-lovers may have attended themselves."

This book should be in the hands of every serious classic rock fan."

This offering is more of a photo collection, many from the early years of Seger's career beginning in the late '60s. Though there are many performance shots featuring a variety of vintage guitars, much of the book is given to intimate photos behind the scenes, or just living life. That is the book's strength, heightened by the photo reproduction, especially the black-and-white shots that comprise the majority of the work. The book has the hallmarks of a university press production, which means the quality is there, from tight editing to inventive page layout, and high-grade paper stock. A fine book.

Travelin' Man captures in photographs the history and legacy of one of the great American rock classics, Bob Seger.

Tom and Gary's pictures and stories took me right back to my days at WRIF in Detroit. A new Seger album would come out, and Punch would be on the phone making sure we were all over every track. Travelin' Man is a vivid reminder of those times and the impact Bob had on making the Motor City 'the home of rock 'n roll.'"

I've been spoonfed Bob Seger from the time I was born. My parents had barn parties on the weekends; they'd get some old tubs and fill them up with beer, and they had a stereo out there and a dirt floor and they'd just throw down-and Bob Seger was always the soundtrack."

– Kid Rock, from the Afterword

The result is an impressive behind-the-scenes documentary that is further enhanced for the reader's benefit with eight Seger album covers, an informative foreword by John Mellencamp, and an insightful afterword by Kid Rock. Of special note for Bob Seger fans is the inclusion of a comprehensive discography making Travelin' Man: On the Road and Behind the Scenes with Bob Seger a must for Seger fans and a recommended addition for academic and community library American 20th Century Music history and reference collections.