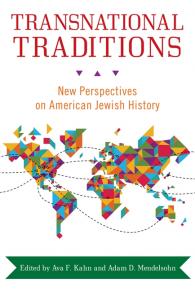 Despite being the archetypal diasporic people, modern Jews have most often been studied as citizens and subjects of single nation states and empires—as American, Polish, Russian, or German Jews. This national approach is especially striking considering the renewed interest among scholars in global and transnational influences on the modern world. Editors Ava F. Kahn and Adam D. Mendelsohn offer a new approach in Transnational Traditions: New Perspectives on American Jewish History as contributors use transnational and comparative methodologies to place American Jewry into a broader context of cultural, commercial, and social exchange with Jews in Europe, the Middle East, Asia, Australia, New Zealand, and South America.

In examining patterns that cross national boundaries, contributors offer new ways of understanding the development of American Jewish life. The diverse chapters, written by leading scholars, reflect on episodes of continuity and contact between Jews in America and world Jewry over the past two centuries. Individual case studies cover a range of themes including migration, international trade, finance, cultural interchange, acculturation, and memory and commemoration. Overall, this volume will expose readers to the variety and complexity of transnational experiences and encounters within American Jewish history.

Accessible to students and scholars alike, Transnational Traditions will be appropriate as a classroom text for courses on modern Jewish, ethnic, immigration, world, and American history. No other single work in the field systematically focuses on this subject, nor covers the range of themes explored in this volume.

Ava F. Kahn is a former research associate at the Western Jewish History Center of the Magnes Museum and fellow at the California Studies Center, Berkeley. Her publications include Jewish Voices of the California Gold Rush: A Documentary History 1849-1880 (Wayne State University Press, 2002), Jewish Life in the American West, California Jews, co-edited with Marc Dollinger, and Jews of the Pacific Coast: Reinventing Community on America's Edge, co-authored with Ellen Eisenberg and William Toll. At present she is working on a documentary film on Jewish reinvention in post-1960s America and researching the role of American Jews in the military and in the home front during WWI.

Adam D. Mendelsohn is associate professor of Jewish studies and director of the Pearlstine/Lipov Center for Southern Jewish Culture at the College of Charleston. He is the author of The Rag Race: How Jews Sewed their Way to Success in America and British Empire (New York University Press, 2014) and editor, with Jonathan D. Sarna, of Jews and the Civil War: A Reader.

Overall, the contributions to the volume do an excellent job of demonstrating how the study of global cultural, commercial, and human connections can add new depth and complexity to familiar topics in both Jewish and American history.

A path-breaking collection of essays that examines American Jewish history from broader and unfamiliar perspectives, showcasing new directions in the field.

Transnational Traditions shows with breadth and depth the extensive bonds that flourished among Jews around the world, linked through the United States, the most popular destination spot in the great age of migration. This volume proves both the fluidity of national boundaries and the centrality of the United States in modern Jewish history.

– Hasia R. Diner, New York University, author of We Remember with Reverence and Love: American Jews and the Myth of Silence after the Holocaust and Hungering for America: Italian, Irish, and Jewish Foodways in the Age of Migration

Overall, this is a significant, sometimes fascinating, compendium.

These ten authors write with the expected enthusiasm of academics breaking new ground in historical research, as they bring to life the migration of people and traditions in wonderful images of transnationalism from the nineteenth to the twenty-first centuries and from the Old World to the New. The book highlights the global nature of the Jewish experience, with Part I focusing on the part played by Australian Jewry in terms of the Jewish transnational profile.

In short, Transnational Traditions offers a modern definition to the word "Diaspora," now a world-wide phenomenon that embraces not only Jews but people of many religions and many lands who seek a new and better life...

Together, [. . .] Kahn and Mendelsohn make a refreshing contribution to the field of migration studies by pushing historians and social scientists to pay attention to specific phenomena and use these to interrogate theoretical concepts and approaches developed in the previous generation’s work on Jewish migration and American Jewish history.