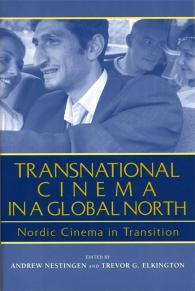 Transnational Cinema in a Global North

Timely and informative, the expert and varied perspectives in this anthology carefully document the recent emergence of a viable transnational Nordic cinematic culture.

Scholarly writing on Nordic cinema has historically focused on such auteurs as Carl Dreyer and Ingmar Bergman. Recent work has neglected to contextualize contemporary Nordic film within the increasingly global climate of the five Nordic countries. While each country retains idiosyncratic themes and cinematic identity, Nordic cinema also shows increasing homogenization in production strategies, aesthetics, and audience taste. At the same time, contemporary Nordic films have enjoyed renewed popularity at home and have at the same time vaulted to global prominence. From heritage films like Babette’s Feast and Pelle the Conquerer to the avant-garde Dogma movement led by Lars von Trier (Breaking the Waves, Dancer in the Dark), to the work of Lukas Moodysson and Aki Kaurismäki, a variety of Nordic films now have wide exposure.

This collection of essays edited by Andrew Nestingen and Trevor G. Elkington is the first to focus on the globalization of Nordic film, particularly its trend toward transnational production procedures, themes, and actors. Wide in breadth, Nestingen and Elkington’s book addresses the comparative cinematic histories of the Nordic countries, the factors that contributed to increased flexibility of national cinematic borders, and the effects of aesthetic and economic trends on the films themselves. To that end, a section of the book is dedicated to analyses of recently influential Nordic films, each piece incorporating transnational influences into its analysis to offer an up-to-date collection of Nordic film criticism. A groundbreaking and much-needed contribution to Nordic film studies, Transnational Cinema in a Global North: Nordic Cinema in Transition provides a unique addition to the growing body of work on transnationalism and globalization.

Andrew Nestingen is assistant professor of Scandinavian studies at the University of Washington.

Trevor G. Elkington is assistant professor of English and cultural studies at the University of Copenhagen.

This is a highly readable and informative volume.

Timely and informative, the expert and varied perspectives in this anthology carefully document the recent emergence of a viable transnational Nordic cinematic culture. By focusing on the unusual aspects of proximity and difference within the Nordic region, the contributors detail a fascinating test case and advance the discussion of transnational cinema beyond simple binaries of hegemony and resistance.

In its thirteen case studies, this hefty, scrupulously-organized and copiously-referenced and –footnoted volume traces the emergence since the 1990s of a transnational film industry and culture in a Nordic region where international relations were already 'economically, politically, and culturally transnational' (p.1). The book thus maps the key economic and artistic trends of the last fifteen years or so in Nordic cinema, and in doing so it also contributes to Film Studies scholarship more generally by un-packing the bundle of concepts and assumptions that keep the idea of 'national cinema; buoyant in film criticism and teaching."

This book contributes admirably to a revision of the notion of Nordic countries' cinema. It presents a comparative outlook on the histories of the different cinema cultures, interrogating the effects of the escalating interaction within the European Union. In addition, by a series of remarkable analyses it introduces recent aesthetic and thematic modes in the Nordic film production.

The film and television coming from the Nordic countries have been of great importance to world culture for many years. Now we have access to a book that skillfully blends art and politics, text and context, and region and nation. This will be a landmark text in film studies.