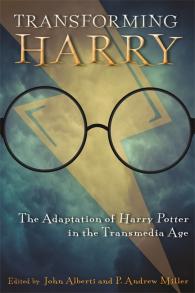 The Adaptation of Harry Potter in the Transmedia Age

Transforming Harry: The Adaptation of Harry Potter in the Transmedia Ageis an edited volume of eight essays that look at how the cinematic versions of the seven Harry Potter novels represent an unprecedented cultural event in the history of cinematic adaptation. The movie version of the first Harry Potter book, Harry Potter and the Sorcerer’s Stone, premiered in 2001, in between publication of the fourth and fifth books of this global literary phenomenon. As a result, the production and reception of both novel and movie series became intertwined with one another, creating a fanbase who accessed the series first through the books, first through the movies, and in various other combinations. John Alberti and P. Andrew Miller have gathered scholars to explore and examine the cultural, political, aesthetic, and pedagogical dimensions of this pop culture phenomenon and how it has changed the reception of both the films and books.

Divided into two sections, the volume addresses both the fidelity of adaptation and the transmedia adaptations that have evolved around the creation of the books and movies. In her essay, Vera Cuntz-Leng draws on feminist film theory to explore the gaze politics and male objectification operating in the Harry Potter movies. Cassandra Bausman contends that screenwriter Steve Klove’s revision of the end of the film version of Deathly Hallows, Part II offers a more politically and ethically satisfying conclusion to the Harry Potter saga than the ending of the Rowling novel. Michelle Markey Butler’s "Harry Potter and the Surprising Venue of Literary Critiques" argues that the fan-generated memes work as a kind of popular literary analysis in three particular areas: the roles of female characters, the comparative analysis of books and films, and the comparative analysis of the Harry Potter series with other works of fantasy.

While the primary focus of the collection is an academic audience, it will appeal to a broad range of readers. Within the academic community, Transforming Harry will be of interest to scholars and teachers in a number of disciplines, including film and media studies and English. Beyond the classroom, the Harry Potter series clearly enjoys a large and devoted global fan community, and this collection will be of interest to serious fans.

John Alberti is professor of English and chair of the English department at Northern Kentucky University, and he has published widely in the areas of cinema studies, writing studies, and popular culture. He is editor of Leaving Springfield: The Simpsons and the Possibility of Oppositional Culture (Wayne State University Press, 2003), and the author of several titles including Screen Ages: A Survey of American Cinema, Masculinity in the Contemporary Romantic Comedy: Gender as Genre, and The Killing (Wayne State University Press, 2017).

P. Andrew Miller is professor of English at Northern Kentucky University. He has published articles on pop culture including Buffy the Vampire Slayer and X-Men. He has published a short story collection titled In Love, In Water, and Other Stories, as well as two chapbooks. His individual short stories and poems have appeared in dozens of journals, anthologies, and magazines.

In Transforming Harry: The Adaptations of Harry Potter in the Transmedia Age, editors John Alberti and P. Andrew Miller have used all the spells in their litany to collect a powerful series of essays about adaptations of the popular Harry Potter series. They’ve used accio scholarship to bring invigorating analyses of fandom, transmediation, and adaptation; alohomora to unlock the secrets of the series; and aparecium to reveal the cultural, political, aesthetic, and pedagogical dimensions of the series in the digital age. This is one collection that all Potter scholars and fans must read!

This collection presents a unique look at the Harry Potter phenomenon that expands on the dialogue about the film adaptation of the novels. The contributors offer very timely discussions on the further reception and transformation of the novels beyond the large screen and to the smaller screens of computers and smartphones.

An extraordinary body of seminal scholarship, the primary focus of this informed and informative collection is academic, but it will have immense appeal to a broad range of dedicated, non-academic Harry potter fans.

3 hours 10 min ago
Happy Pub Date to THE SPOOK WHO SAT BY THE DOOR, SECOND EDITION! This new edition of a literary classic now includ… https://t.co/XrCsLZvf4D
3 hours 14 min ago
RT @DarkProjections: Returned from a great two weeks in Europe to find copies of my new book! Kolchak:The Night Stalker, one of the Pion… https://t.co/kPJ5kKLRyr
1 day 10 min ago
RT @oneitadetroit: Thrilled that @WSUPress is releasing the 2E of Sam Greenlee's "The Spook Who Sat by the Door" tomorrow. Introductio… https://t.co/hZpAjxluIl