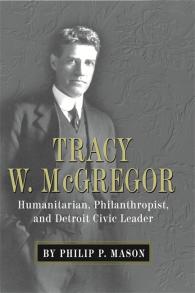 A fascinating story of a modest but remarkable man who truly made a difference!

In the turbulent era from 1890 to the late 1930s, Detroit emerged as a leading industrial and urban center and endured the crushing social and economic challenges of the Great Depression. It was during these years that Tracy W. McGregor, with the assistance of his wife, Katherine Whitney McGregor, established himself as a philanthropist and community leader. Though public buildings and a charitable foundation bear their names, relatively little is known about the private-minded McGregors, who avoided newspaper interviews or public exposure whenever possible.

In Tracy W. McGregor, Philip P. Mason scours the archival collections of the University of Michigan, Wayne State University, the State of Michigan, the Burton Historical Collection of the Detroit Public Library and the Library of Congress to provide a comprehensive look at the remarkable work of the McGregors. Mason examines McGregor’s successful campaigns to reform the political, judicial, and educational institutions in Detroit, as well as his establishment of mental health, correctional, and health care facilities in Michigan. In addition, Mason surveys McGregor’s work as president of the prestigious Merrill-Palmer Institute and his major collection of Americana books, which now serves as the core of the University of Virginia Research Library.

In all, Mason shows how Tracy McGregor was able to establish a mission for homeless men, permanently endow a major foundation, and lead in the creation and support of a variety of charitable agencies without governmental assistance and with only the support of nascent philanthropic and business networks. For Detroit historians and those interested in philanthropy and social activism, Tracy W. McGregor will be enlightening reading.

...this biography should be of interest to those studying the broader history of the city, as it provides a lens for viewing Detroit's growth and change."

Mason masterfully combines his vast knowledge of Detroit's history-from Prohibition to immigration, from politics to social change-with the remarkable McGregor collection assembled and preserved by Mildred White. This is a must-read, whether you seek good history or an inspiring model of philanthropic leadership grounded in a passion to serve, commitment to sound management, and civic responsibility.

With this meticulous and engaging study, Philip Mason shows how Tracy McGregor's dedication to philanthropy and civic engagement helped to shape modern Detroit and improve the lives of its people. The book couldn't come at a better time. In these difficult days, we need to be reminded of the marvelous things that a good man can accomplish.

– Kevin Boyle, professor of history at The Ohio State University and author of Arc of Justice: A Saga of Race, Civil Rights, and Murder in the Jazz Age

Based upon previously unexplored source material, Mason has provided us for the first time with a detailed and nuanced biography of one of the great but largely unappreciated figures in the history of Detroit and American philanthropy who, as a late-in-life collector of Americana, helped save vital portions of our nation's precious historical heritage when threatened by the Depression. A fascinating story of a modest but remarkable man who truly made a difference!

– John Dann, director emeritus of the Clements Library at the University of Michigan

Philip P. Mason, a distinguished Professor of History at Wayne State University, provides a comprehensive look at this remarkable man and his contributions to the social fabric of Detroit and the entire state of Michigan."

Tracy W. McGregor: Humanitarian, Philanthropist, and Detroit Civic Leader is a worthy tribute to a man who was determined to make Detroit a better place to live."

6 hours 7 min ago
Happy Pub Date! HOUSE AND HOME is a collection of poems that intensely explore the beauty & wisdom to be found in w… https://t.co/MYnkKJxcrx
2 days 8 hours ago
Join WSU President M. Roy Wilson for a book talk next Wednesday! Copies of his memoir will be available for sale a… https://t.co/6q5w5dtFtu
4 days 8 hours ago
TONIGHT! Join @stephanie_heit at @ShopBooksweet for local author's night! https://t.co/pTny5OErDe