Home » Books » From Tinseltown to Bordertown 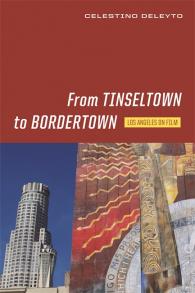 From Tinseltown to Bordertown

Los Angeles is a global metropolis whose history and social narrative is linked to one of its top exports: cinema. L.A. appears on screen more than almost any city since Hollywood and is home to the American film industry. Historically, conversations of social and racial homogeneity have dominated the construction of Los Angeles as a cosmopolitan city, with Hollywood films largely contributing to this image. At the same time, the city is also known for its steady immigration, social inequalities, and exclusionary urban practices, not dissimilar to any other borderland in the world. The Spanish names and sounds within the city are paradoxical in relation to the striking invisibility of its Hispanic residents at many economic, social, and political levels, given their vast numbers. Additionally, the impact of the 1992 Los Angeles riots left the city raw, yet brought about changing discourses and provided Hollywood with the opportunity to rebrand its hometown by projecting to the world a new image in which social uniformity is challenged by diversity. It is for this reason that author Celestino Deleyto decided to take a closer look at how the quintessential cinematic city contributes to the ongoing creation of its own representation on the screen.

From Tinseltown to Bordertown: Los Angeles on Film starts from the theoretical premise that place matters. Deleyto sees film as predominantly a spatial system and argues that the space of film and the space of reality are closely intertwined in complex ways and that we should acknowledge the potential of cinema to intervene in the historical process of the construction of urban space, as well as its ability to record place. The author asks to what extent this is also the city that is being constructed by contemporary movies. From Tinseltown to Bordertown offers a unique combination of urban, cultural, and border theory, as well as the author’s direct observation and experience of the city’s social and human geography with close readings of a selection of films such as Falling Down, White Men Can’t Jump, and Collateral. Through these textual analyses, Deleyto tries to situate filmic narratives of Los Angeles within the city itself and find a sense of the "real place" in their fictional fabrications. While in a certain sense, Los Angeles movies continue to exist within the rather exclusive boundaries of Tinseltown, the special borderliness of the city is becoming more and more evident in cinematic stories.

Deleyto’s monograph is a fascinating case study on one of the United States’ most enigmatic cities. Film scholars with an interest in history and place will appreciate this book.

Celestino Deleyto is professor of film and English literature at the Universidad de Zaragoza, Spain. He is the author of The Secret Life of Romantic Comedy and co-author with María del Mar Azcona of Alejandro González Iñárritu.

Celestino Deleyto provides an extraordinarily nuanced and integrated analysis of contemporary American cinema by looking at Los Angeles—Hollywood’s backlot (as the most mediated city on the silver screen), globalism’s archetypal metropolis, and a city of neighborhoods with a brown (and mostly Mexican) majority. From Tinseltown to Bordertown moves back and forth between city and screen, and from small budget indies to blockbusters, providing a rare and timely consideration of Hollywood as a diverse set of institutions and industrial practices that are more like a "network of freeways" than a three-act story. Deleyto offers a new model for film scholarship that maps the otherwise "undecipherable tangle" of interchanges connecting Hollywood with our multiracial society.

– Chon A. Noriega, author of Shot in America: Television, the State, and the Rise of Chicano Cinema

Celestino Deleyto clearly knows and loves Los Angeles and its films. From Tinseltown to Bordertown is a wide-ranging and engaging study of LA's shifting urban dynamics since 1992 (Rodney King and the riots), as showcased—or erased—in mainstream and independent films. Offering rigorous analyses, making cogent connections, this book is a must read!

– Chris Holmlund, author of Impossible Bodies and Female Trouble, co-editor (with Justin Wyatt) of Contemporary American Independent Film, and editor of American Cinema of the 1990s and The Ultimate Stallone Reader.

In this study of city and cinema, Celestino Deleyto searches for and finds Los Angeles. Through a focus on background and the edges of the frame, he shines a light on Hollywood’s cinematic city and makes it visible in all of its complexity and diversity. Rigorously researched, theoretically sophisticated, and richly illustrated, this is a wonderful read that reveals Los Angeles in new ways.

– Deborah Shaw, reader in film studies at the University of Portsmouth. She is co-editor of Transnational Cinemas and her forthcoming book is Latin American Women Filmmakers: Production, Politics, Poetics, co-edited with Deborah Martin.

A fascinating and quite original contribution to the literature on the representation of urban life in film, valuable not only for its research into the history of Los Angeles but also for its sharp critical and theoretical observations about specific pictures.

– James Naremore, author of More Than Night: Film Noir in Its Contexts

Wherever Deleyto wanders in Tinseltown–Bordertown, he never strays from the path he lays out in his first chapter: reminding the reader that film analysis requires a nuanced understanding of onscreen as well as offscreen space...In some ways, I think that this book could only be written by an outsider, and I want to shout out to everyone seeking a better understanding of Los Angeles on film: Read this book!

3 hours 54 min ago
Happy Pub Date to THE SPOOK WHO SAT BY THE DOOR, SECOND EDITION! This new edition of a literary classic now includ… https://t.co/XrCsLZvf4D
3 hours 58 min ago
RT @DarkProjections: Returned from a great two weeks in Europe to find copies of my new book! Kolchak:The Night Stalker, one of the Pion… https://t.co/kPJ5kKLRyr
1 day 54 min ago
RT @oneitadetroit: Thrilled that @WSUPress is releasing the 2E of Sam Greenlee's "The Spook Who Sat by the Door" tomorrow. Introductio… https://t.co/hZpAjxluIl