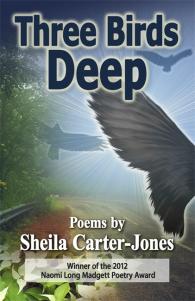 This is a stunning book of risk, movement, and deep feeling. With wild, leaping detail and surprising connections, the author catapults the reader into the visceral world where the whole body lives. This is not poetry of the floating voice or the afternoon tea. This is brave, original, and significant work that requires us to feel. Our humanity is summoned in poem after poem. The book is appropriately titled, for much of the imagery involves depth of feeling juxtaposed against appearance. The author succeeds marvelously in seeing beyond facades and revealing thought that often contradicts word, as in "Where Some People Get Mixed Up About the Meaning of Hello." In addition, her relationship with nature is apparent. Much of the imagery concerns various birds and wings but also relates to other creatures—spiders, moths, bees, grasshoppers, and catfish.
The experiences of ordinary Americans ring true. They are characterized in convincing ways. They are people we know and understand.
While death is the subject of many of the poems, the book is not at all morbid and is universal in scope. We can all identify with it. "Three Birds Deep" and "How Far Down" introduce us to the father who has worked deep down in the earth mining coal and now suffers physically from the effects. We get to know the brother, veteran of the Viet Nam War to whom death and killing have become ordinary, in "Here. Now. Nam, " "Elegy for Douglas Mason," "Pretty Boy," and "Die Laughing." In "The Handkerchief’s Catharsis" we see the grandmother who "dreams wings" as she lies in her coffin.
These are poems that draw the reader back to them over and over, not for information but for the music that resonates long after the book is closed.

Sheila Carter-Jones is a facilitator of research for the National Afterschool Matters initiative Practitioner Fellowship in the School of Education at the University of Pittsburgh. She is also the author of a chapbook, Blackberry Cobbler Song. Her poetry has appeared in numerous publications and anthologies.