Home » Books » There She Goes 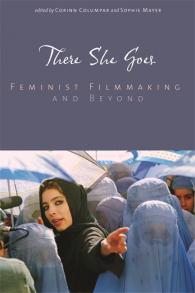 Feminist Filmmaking and Beyond

Following in the footsteps of the filmmakers whose work it features—including Miranda July, Janie Geiser, Tracey Moffatt, Sally Potter, Cindy Sherman, Samira Makhmalbaf, Sadie Benning, Agnès Varda, Kim Longinotto, and Michelle Citron—There She Goes: Feminist Filmmaking and Beyond seeks to make trouble not only in the archives but also at the boundaries between artistic, industrial, political, critical, and disciplinary practices. Editors Corinn Columpar and Sophie Mayer have assembled scholarship that responds to women’s work in the interstices between different branches of the film industry, modes of filmmaking, national or transnational contexts, exhibition media, and varieties of visual representation in order to assess the exchanges such work enables.

Essays in the first three sections of There She Goes explore connections at the level of curation and exhibition, while the subsequent four consider local connections such as those between the film and the audience or between works within an oeuvre, down to those occurring on the surface of the film. Contributors reach beyond traditional screen cinema to interact with a larger field of artistic production, including still photography, music videos, installation art, digital media, performance art, and dance. Essays also pay particular attention to a variety of contextual factors that have shaped women’s filmmaking, from the conditions of production and circulation to engagement with various social movements and critical traditions, including, but not limited to, feminism.

By foregrounding fluidity, There She Goes presents a an exciting new appraisal of feminist film culture, as well as the intellectual and affective potential it holds for filmmakers and filmgoers alike. Scholars of film and television studies and gender studies will appreciate the fresh outlook of There She Goes.

Corinn Columpar is assistant professor of English and cinema studies at the University of Toronto and author of Unsettling Sights: The Fourth World on Film.

Sophie Mayer is an independent scholar and author of The Cinema of Sally Potter: A Politics of Love.

Ultimately, There She Goes is a rich-and much-needed-contribution to feminist film scholarship."

12 hours 44 min ago
DETROIT BOOK OF THE DAY: DAY 1 THE DETROIT SYMPHONY ORCHESTRA details the history of the @DetroitSymphony as seen… https://t.co/7zpUnVRwiw
1 day 7 hours ago
In honor of the #CityofDetroit turning 321 years old on July 24th, WSUPress will be showcasing one Detroit Book of… https://t.co/PA7nONh4C0
1 day 12 hours ago
OUR FALL & WINTER 2022 TITLES ARE NOW AVAILABLE FOR PRE-ORDER! Grab your copy of any of our fall & winter titles f… https://t.co/qDykAsF9sk