Home » Books » That That 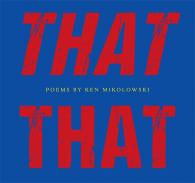 Poet Ken Mikolowski ran a letterpress printing house for over thirty years, setting poems by hand, one letter at a time—an experience that influenced his love of short verse. In That That, Mikolowski presents his trademark quirky, humorous, and insightful poems, none longer than three brief lines and some made up of only two or three carefully chosen words. Together, these poems create a narrative of life and love broken down to the most minimal of forms.

Mikolowski’s deceptively simple collection takes readers on a whirlwind tour through weighty topics and humorous vignettes. He reflects on the nature of art, identity, and legacy in poems that muse in their entirety, "I’ve never met a deadline / I’ve ever met yet" and "Why I am not a New York poet / Detroit." Mikolowski also gives unparalleled assessments of serious subjects like love, aging, and death, declaring, "Sometimes / I don’t think of you / for hours" and "Getting old / gets old / real quick." Some poems are more lighthearted and delight only in the wordplay of rhyme or unexpected imagery, adding an unmistakably playful element to this spare but polished volume.

Mikolowski’s collection demonstrates the singular power of language in the hands of a master craftsman. That That will be read and re-read by anyone interested in short poetry.

Ken Mikolowski is the author of four previous books, Thank You Call Again, little mysteries, Big Enigmas, and Remember Me. His poems have been published in Brooklyn Rail, Hanging Loose, Exquisite Corpse, and Abandon Automobile, A Detroit Anthology, and have been recorded by the Frank Carlberg Group. Mikolowski teaches poetry writing at the University of Michigan and, along with his wife Ann, was publisher, editor, and printer of The Alternative Press. He lives in Ann Arbor.

Poet Ken Mikolowski ran a letterpress printing house for over thirty years, setting poems by hand, one letter at a time-an experience that influenced his love of short verse. In That That, Mikolowski presents his trademark quirky, humorous, and insightful poems, none longer than three brief lines and some made up of only two or three carefully chosen words. Together, these poems create a narrative of life and love broken down to the most minimal of forms.

Haiku is excessive. What luxury. In five mere words, Ken Mikolowski can do what the ancients needed seventeen syllables to accomplish in his book That That. . . . Why do we waste time on any of the fluff? Let’s get right to the good stuff. These entire poems are erected and finished within three lines. They contain everything needed to provide revelation and center the soul. Above all, the poems function at the proverbial level. Poetry is supposed to guide us in our search for life’s answers. Art is both the dazzle and excess of existence, and simultaneously the bread and bones that give life to life. These poems seek to burn the fat off of our very souls. The good part can be any part, but it most certainly is not every part. Sometimes palindromes aren’t actually the words themselves, but the actions of lovers. And more often than not art can be found without thinking for hours. Ken Mikolowski’s life is full of meaning:
"The meaning is somewhere
so we go everywhere"
And so is ours.

Mikolowski is a poetic trickster, using minimalism and humor to reveal the emperor without any clothes. His short poems are just the tip of a vision that is full of love for the world and all of its failures.

That That is a witty, crystalline long poem of aging and mortality, composed of Mikolowski’s traditional short shorts. It makes you think it. You have to be in the words of it exactly, or you can’t read it. You have totally to identify with those words as that, That That. That is its singular accomplishment, the singular word you become—art. Not that!

Ken Mikolowski's poems, with their surgical precision and laserlike insights and breathtaking minimalist shifts, induce a wonderful whiplash in the reader. You read a line or two, and think you are ready to turn the page, until you have to stop, think, wait, go back, and see all the things that are there on the page that you almost missed. Mikolowski has a comedian's timing with a painter's eye and novelist's breadth and a philosopher's depth. This is a book you might read quickly, but the echoes and insinuations of which won't be finished with you for a very long time. This is poetry at the wittiest, wildest, sharpest edge of the art.