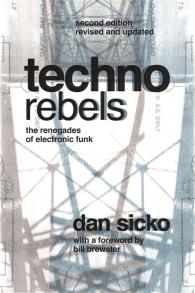 The Renegades of Electronic Funk

Dan Sicko
With a Foreword by Bill Brewster

Techno Rebels is a must for anyone interested in music history and for community library music collections.

When it was originally published in 1999, Techno Rebels became the definitive text on a hard-to-define but vital genre of music. Author Dan Sicko demystified techno’s characteristics, influences, and origins and argued that although techno enjoyed its most widespread popularity in Europe, its birthplace and most important incubator was Detroit. In this revised and updated edition, Sicko expands on Detroit’s role in the birth of techno and takes readers on an insider’s tour of techno’s past, present, and future in an enjoyable account filled with firsthand anecdotes, interviews, and artist profiles.

Techno Rebels begins by examining the underground 1980s party scene in Detroit, where DJs and producers like the Electrifying Mojo, Ken Collier, The Wizard, and Richard Davis were experimenting with music that was a world apart from anything happening in New York or Los Angeles. He details the early days of the "Belleville Three"—Juan Atkins, Derrick May, and Kevin Saunderson—who created the Detroit techno sound and became famous abroad as the sound spread to the UK and Europe. In this revised edition, Sicko delves deeper into the Detroit story, detailing the evolution of the artists and scene into the mid-1990s, and looks to nearby Ann Arbor to consider topics like the Electrifying Mojo’s beginnings, the role of radio station WCBN, and the emergence of record label Ghostly International. Sicko concludes by investigating how Detroit techno functions today after the contrived electronica boom of the late 1990s, through the original artists, new sounds, and Detroit’s annual electronic music festival.

Ultimately, Sicko argues that techno is rooted in the "collective dreaming" of the city of Detroit—as if its originators wanted to preserve what was great about the city—its machines and its deep soul roots. Techno Rebels gives a thorough picture of the music itself and the trailblazing musicians behind it and is a must-read for all fans of techno, popular music, and contemporary culture.

Dan Sicko (1968-2011) has written for numerous publications, including Rolling Stone, Wired, and Urb, and founded the early digital music magazine Reverb. Sicko also gave lectures on the techno music scene and served as creative director for the Detroit office of Organic, Inc.

Reading Dan Sicko's Techno Rebels is like having a conversation with a really cool friend who has a great memory and also happens to have been present, hanging around, talking to the right people, at one of the most interesting periods musically in this city's musically crucial history."

– Jerry Herron, dean of the Irvin D. Reid Honors College at Wayne State University and author of AfterCulture: Detroit and the Humiliation of History

As techno, the music, continues to spread worldwide, and techno, the idea, becomes slipperier with the years, Dan Sicko's thorough, intimate account of the music's origins is more relevant than ever. It confirms Detroit techno's legacy as one of those miraculous cultural accidents-a collision of time, place, technology, and individuals-that catch the world off-guard and keep resonating long after the original signal has faded, at every imaginable frequency."

– Philip Sherburne, columnist for The Wire and Pitchfork

Techno Rebels is a must for anyone interested in music history and for community library music collections."

A trailblazing look at the history of techno.

7 hours 54 min ago
Wayne State University Press is proud to announce our winner and finalists of the 2022 Next Generation Indie Book A… https://t.co/Ozy1WEQY1i
1 day 12 hours ago
Congratulations to all of the winners! https://t.co/Em8m5qoESk https://t.co/0EX9yD1vge
2 days 13 hours ago
RT @muckrack: Today's featured journalist is @fkwang, Communities Correspondent at @NewsHour. Based in Detroit, Frances covers As… https://t.co/XK9qCAOXhS