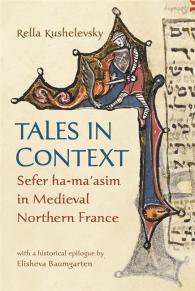 Rella Kushelevsky
With a historical epilogue by Elisheva Baumgarten

In the thirteenth century, an anonymous scribe compiled sixty-nine tales that became Sefer ha-ma’asim, the earliest compilation of Hebrew tales known to us in Western Europe. The author writes that the stories encompass "descriptions of herbs that cure leprosy, a fairy princess with golden tresses using magic charms to heal her lover’s wounds and restore him to life; a fire-breathing dragon . . . a two-headed creature and a giant’s daughter for whom the rind of a watermelon containing twelve spies is no more than a speck of dust." In Tales in Context: Sefer ha-ma’asim in Medieval Northern France, Rella Kushelevsky enlightens the stories’ meanings and reflects the circumstances and environment for Jewish lives in medieval France. Although a selection of tales was previously published, this is the first publication of a Hebrew-English annotated edition in its entirety, revealing fresh insight.

The first part of Kushelevsky’s work, "Cultural, Literary and Comparative Perspectives," presents the thesis that Sefer ha-ma’asim is a product of its time and place, and should therefore be studied within its literary and cultural surroundings, Jewish and vernacular, in northern France. An investigation of the scribe's techniques in reworking his Jewish and non-Jewish sources into a medieval discourse supports this claim. The second part of the manuscript consists of the tales themselves, in Hebrew and English translation, including brief comparative comments or citations. The third part, "An Analytical and Comparative Overview," offers an analysis of each tale as an individual unit, contextualized within its medieval framework and against the background of its parallels. Elisheva Baumgarten's epilogue adds social and historical background to Sefer ha-ma’asim and discusses new ways in which it and other story compilations may be used by historians for an inquiry into the everyday life of medieval Jews.

The tales in Sefer ha-ma’asim will be of special value to scholars of folklore and medieval European history and literature, as well as those looking to enrich their studies and shelves.

Rella Kushelevsky is a professor at Bar-Ilan University. Her main interests are medieval tales in Hebrew, and Talmudic stories. She is also the author of Moses and the Angel of Death and Penalty and Temptation: Hebrew Tales in Ashkenaz.

This is an important book that makes available a unique collection of medieval Hebrew stories that the author places in their comparative literary and cultural settings.

In Tales in Context, Rella Kushelevsky presents the student and scholar of medieval folklore and Jewish life in Christian Europe with a vital resource. Moreover, her rich and insightful theses about the composition of this work from the literary, scribal and cultural perspectives, coupled with the historical epilogue by Elisheva Baumgarten, will further enlighten readers in a variety of fields.

This important book provides Jewish Studies scholars, medievalists and students of European culture with a point of entry into the sources that both shape and reflect the complex worlds of medieval northern-French Jews. The profound literary, comparative and historical analysis, supplemented by an annotated edition and translation of the medieval tales and a facsimile edition of the beautiful Bodleian Library manuscript, turn this book into a treasure trove.

– Ephraim Shoham-Steiner, professor in the department of Jewish history at Ben-Gurion University of the Negev

Sefer ha-Ma'asim is one of the most interesting collections of Hebrew stories that survived from the Middle Ages. In addition to being an entertaining and rich body of medieval folklore, it is one of the most revealing texts about Jewish life and spiritual world— not of the learned elite, but of the larger segments of Jewish society in twelfth and thirteenth centuries. The present edition of the early thirteenth century manuscript is one of the most comprehensive scholarly edition of any Hebrew collection of tales known to us from the Middle Ages. It is not only a presentation and translation of texts, but an in-depth study of Jewish minority folklore in Christian Europe.

Although a selection of tales was previously published, this is the first publication of a Hebrew-English annotated edition in its entirety, revealing fresh insight. [...] The tales in Sefer ha-ma'asim will be of special value to scholars of folklore and medieval European history and literature, as well as those looking to enrich their studies and shelves.

[...] the stories [of the Sefer ha-ma'asim], which we can now read in English in "Texts in Context," open an entire new window into the daily lives of Ashkenazi Jewry.

Kushelevsky and her translators, Ruchie Avital and Chaya Naor, have rendered a tremendous service in making these medieval Hebrew tales accessible to a wider audience. As the tales circulate, they will be read in unanticipated and illuminating contexts.

This welcome edition of the Sefer ha-ma‘asim, an anthology of sixty-nine Hebrew tales adapted, arranged, and composed in thirteenth-century France, offers readers a literary feast.