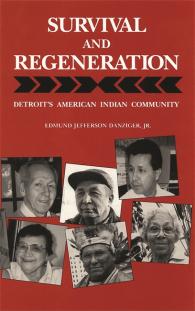 Survival and Regeneration captures the heritage of Detroit's colorful Indian community through printed sources and the personal life stories of many Native Americans. During a ten-year period, Edmund Jefferson Danziger, Jr. interviewed hundreds of Indians about their past and their needs and aspirations for the future. This history is essentially their success story.

In search of new opportunities, a growing number of rural Indians journeyed to Detroit after World War II. Destitute reservations had sapped their physical and cultural strength; paternalistic bureaucrats undermined their self-respect and confidence; and despairing tribal members too often sound solace in mind-numbing alcohol. Cut off from the Bureau of Indian Affairs services, many newcomers had difficulty establishing themselves successfully in the city and experienced feelings of insecurity and powerlessness. By 1970, they were one of the Motor City's most "invisible" minority groups, so mobile and dispersed throughout the metropolitan area that not even the Indian organizations knew where they all lived.

To grasp the nature of their remarkable regeneration, this inspiring volume examines the historic challenges that Native American migrants to Detroit faced - adjusting to urban life, finding a good job and a decent place to live, securing quality medical care, educating their children, and maintaining their unique cultural heritage. Danziger scrutinizes the leadership that emerged within the Indian community and the formal native organizations through which the Indian community's wide-ranging needs have been met. He also highlights the significant progress enjoyed by Detroit Indians - improved housing, higher educational achievement, less unemployment, and greater average family incomes - that has resulted from their persistence and self-determination.

Historically, the Motor City has provided an environment where lives could be refashioned amid abundant opportunities. Indians have not been totally assimilated, nor have they forsaken Detroit en masse for their former homelands. Instead, they have forged vibrant lives for themselves as Indian-Detroiters. They are not as numerous or politically powerful as their black neighbors, but the story of these native peoples leaves no doubt about their importance to Detroit and of the city's effect on them.

Edmund Jefferson Danziger, Jr. was a professor of history at Bowling Green State University. Since earning his Ph.D. from the University of Illinois, he has published two books, The Chippewas of Lake Superior and Indians and Bureaucrats: Administering the Reservation Policy During the Civil War.