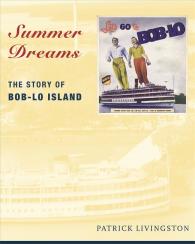 The Story of Bob-lo Island

More than a trip down memory lane, Summer Dreams also exposes the backdrop story of racism, gang trouble and mismanagement of the island by various groups. Wonderful illustrations and first person accounts from folks who visited and worked there, round out this excellent regional history.

— The Past in Review Blog

Located twenty miles south of Detroit where the Detroit River meets Lake Erie, Bob-lo Island was the ultimate summer playground for families from Detroit and Windsor for nearly one hundred years. In its heyday, the island housed an amusement park with one of the world’s largest dance halls, an elegant restaurant, and a hand-carved carousel. It also employed two large Frank Kirby–designed ferry steamers—complete with dancing and other entertainment—to transport patrons to and from the island, which was not accessible by car. In Summer Dreams, author Patrick Livingston tells the story of Bob-lo from its discovery by French explorers to its subsequent use by missionaries, British military men, escaped slaves, farmers, and finally the wealthy class, who developed the island as a summer resort.

It was not until the Detroit, Belle Isle, and Windsor Ferry Company, looking to expand its business ventures, bought the island in 1898 that Bob-lo became known as a destination for Detroit’s burgeoning middle class. The park provided the perfect place for Detroiters to dance and play and simply escape the whirlwind of what was rapidly becoming an industrial and mechanized city. Livingston notes that operation of the park presented special challenges to management teams over the course of the century, particularly in the running of its U.S.–based steamers and competition with modern amusement parks that could be reached by car. Livingston chronicles the island’s recent history, including the final closure of the park in 1993, the auctioning of its steamers and rides, and its redevelopment as a community of multimillion-dollar homes.

With illustrations and personal profiles added to its historical narrative, Summer Dreams recounts the phases of Bob-lo’s history and its importance to natives of Detroit, Windsor, and Amherstburg. Local historians and anyone with roots in Detroit and the Border Cities will enjoy this informative volume.

Patrick Livingston is the author of Eight Steamboats (Wayne State University Press, 2004) and a former agent with Michigan State University Extension and Michigan Sea Grant. He is currently involved with the Great Lakes Education Program on the Detroit River and a project linking teachers from Nepal and Michigan in water-quality analysis and information sharing.

Anyone seeking an example of how local history ought to be told need look no farther than Summer Dreams."

Patrick Livingston has written the complete book on Bob-lo, from the well-known subjects of amusement rides and river cruises to the lesser-known tales of racism, insolvency, and rowdy motorcycle gangs. Summer Dreams is smart, informative, and a great addition to anyone's local history bookshelf.

Summer Dreams contains 94 illustrations and numerous personal profiles added to its historical narrative. Patrick Livingston traces the history of the island from its discovery by French explorers, through its development as an amusement park, and through its redevelopment as a community of multimillion dollar homes."

More than a trip down memory lane, Summer Dreams also exposes the backdrop story of racism, gang trouble and mismanagement of the island by various groups. Wonderful illustrations and first person accounts from folks who visited and worked there, round out this excellent regional history."

– The Past in Review Blog

Livingston not only captures the glory years on Bob-lo with its many amusement rides and attractions, he goes behind the scenes to reveal the inner workings of both the island and the famed steamers used the ferry patrons to and from the island. Summer Dreams: The Story of Bob-lo Island is recommended to anyone who has pleasant memories of riding the Thunderbolt, enjoying a picnic lunch on the immaculately kept grounds or stealing a kiss from your best girl on the Moonlight Cruise."

Summer Dreams will rekindle memories for anyone who bathed in cool river breezes or thrilled to the simple pleasures that are Bob-lo's legacy. Straightforward prose and nostalgic images document the whole story, from picnics to politics. Best of all, Patrick Livingston answers the oft-asked question, 'Whatever happened to Bob-lo?'