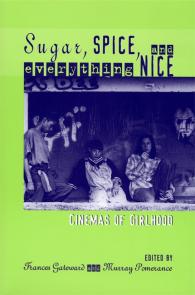 Sugar, Spice, and Everything Nice

This anthology fills gaps in feminist film criticism, film history, cultural studies, and women's studies, and it is certain to be a welcome addition in libraries and classrooms everywhere.

From the Wizard of Oz to Lolita, from the Heathers to the Spice Girls, images of girlhood have been projected on the silver screen in myriad ways. Whether a girl is taught that "there is no place like home" or is seeking adventure on her own terms, whether she is a seductress or a nerd, a babysitter or a murderer, films have depicted society’s problematic expectations of girls together with the dreams, anxieties, and tensions experience by girls themselves. In examining the construction of girlhood from many angles, this collection of essays not only captures the richness of meaning behind "girl films," but also explores the recent resurgence of youth-oriented cinema and the relationship of young female viewers to that medium.

The twenty essays approach to the construction of girlhood from a variety of perspectives, including reception, production, star images, and textual analyses, while exploring such topics as star power, the Riot Grrrl movement, coming of age, and loss of innocence. Among the characters given special attention are those in Gidget, Crooklyn, Titanic, Freeway and Girls Town. Written for general and academic readers, this work offers a lively, unprecedented discussion of gender in youth-oriented films.

Fraces Gateward teaches courses in film and popular culture in the Program in Film and Video and the Center for Afro-American and African Studies at the University of Michigan. Her work has been published in a number of journals and anthologies. She is editor of Zhang Yimou: Interviews (2001).

Murray Pomerance is professor and chair in the department of sociology at Ryerson University. His books include Ladies and Gentlemen, Boys and Girls: Gender in Film at the end of the 20th Century (2001) and Bang Bang Shoot Shoot! Essays on Violence and Popular Culture (1998).

Of all the blind spots that exist in film scholarship, the lack of serious analyses of young women in the cinema has been one of the most glaring. Gateward and Pomerance have done an extraordinary job of bringing together diverse perspectives on girls in film from Dorothy in The Wizard of Oz to Sadie Benning's Pixelvision experimental autobiographies. This anthology fills gaps in feminist film criticism, film history, cultural studies, and women's studies, and it is certain to be a welcome addition in libraries and classrooms everywhere.