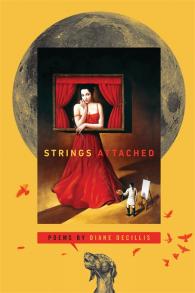 These warm philosophical poems explore a cultural and emotional terrain similar to the work of Naomi Shihab Nye.

In Strings Attached, poet Diane DeCillis takes inspiration from the story of the elephant calf with a thin rope tied to its leg. Even when it grows into a massive animal, the elephant thinks the same string still restrains it and never attempts to break free. This powerful, funny, and sometimes self-deprecating collection considers all the ways that strings bind us in relationships and explores their constant tightening and loosening. Although we may never sever the strings attached to our wounds, DeCillis shows that when given enough slack we can create the illusion of having been set free.

The poems in Strings Attached consider tension in a variety of relationships. The short string of an American girl raised in Detroit by a resentful Lebanese grandmother whose culture values boys over girls. The attachment to a strong mother who exemplifies feminism but who is mostly absent in order to support the family. The cosmopolitan father who abandons but captivates, and the strings of relationships with older men, built on longing for the missing father. The long strings of a secret life that teach you to be distant. The strings that cuff you to your home, and the triumph of loosening them after years of agoraphobia. The frayed strings that come from being too American in a Lebanese culture. The strings of food and tradition that connect to family and friends.

DeCillis’s verse reflects an insistent search for identity and the happy discovery that outsider status can be a good thing, a kind of earned badge that provides new ways of seeing. All poetry readers will relate to the personal and perceptive verse of this debut collection.

Diane DeCillis’s poetry has been nominated for two Pushcart Prizes and Best American Poetry. She was awarded the Crucible Poetry Prize and Ocean Prize, and won the MacGuffin National Poet Hunt. Her work has appeared in CALYX, The North Atlantic Review, Nimrod International Journal, Connecticut Review, Gastronomica, and numerous other journals. She is co-editor of Mona Poetica, an anthology dedicated to the Mona Lisa, and until recently owned an award-winning art gallery in Birmingham, Michigan.

Strings Attached is just such a gem. . . Decillis eases you into poetic forms with such grace that you want to read the pantoum on page 40, for example, over and over, delighting in her twists and turns and what she is teaching so painlessly – and probably without even intending to educate.

To say there’s a seedy elegance to these sparkly, crystalline poems is to say they contain everything from broken glass to diamonds, from fleabag motels and cheap pizza and junkies to limos and tuxes, Chopin and Debussy. In fact, Diane DeCillis’s grasp of the world’s gritty beauty means there isn’t a whole lot that isn’t in these poems (there’s even a recipe for baklava).

Her 60+ poems tease the intellect, warm the heart, please the ear, whet the physical and spiritual appetites, and nourish artistic sensibilities with their worldly elegance, lyricism, surprising turnsof-phrase, and evocative narratives.

In this exquisite collection, DeCillis delves into the nature of our attachments through poems that reach out in every direction, exploring everything from Chopin and modern art to sleazy hotels, absinthe, and the sudden yellow bloom of a maple tree. The lush and dense metaphors of life and love that food, color, and music offer, provide us with new ways to negotiate the strings that bind us, intertwining sensibility and sensuality, helping us reconnect with the esthetic potential of our lives, our relationships and the world around us.

Diane DeCillis writes savory poems that make us homesick in multiple ways—for the mysterious people we are connected to, rooms we stayed in too briefly, moments which did or didn't quite click, art and dreaming, and plates on the table. A reader feels more ‘anchored to the soil of home’ and linked to all time, visionary past, forward horizon. These wonderful poems have their own needles and threads built right into them and the warmth of deepest care.

Diane DeCillis is the ‘Belle of the String Theory Ball,’ rooted in Detroit, passionate about her Lebanese grandmother, good food, art, and dreams. These warm philosophical poems explore a cultural and emotional terrain similar to the work of Naomi Shihab Nye. DeCillis ponders Twinkies, absinthe, agoraphobia, the color yellow, insomnia, Cezanne, physics, croissants, and Alfred Hitchcock, all the while unraveling the ball of string that comprises our mortal attachments so she can get to what’s real—the sacred nature of love, life, the universe.

I praise DeCillis for drawing up connects among what may seem fractured, bringing forth hope even when
the speaker appears to have struggled with keeping their past loves close . . .

9 hours 34 min ago
Wayne State University Press is proud to announce our winner and finalists of the 2022 Next Generation Indie Book A… https://t.co/Ozy1WEQY1i
1 day 14 hours ago
Congratulations to all of the winners! https://t.co/Em8m5qoESk https://t.co/0EX9yD1vge
2 days 14 hours ago
RT @muckrack: Today's featured journalist is @fkwang, Communities Correspondent at @NewsHour. Based in Detroit, Frances covers As… https://t.co/XK9qCAOXhS