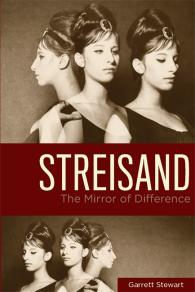 The Mirror of Difference

At every stage of her career, Barbra Streisand’s genius finds its fullest measure in screen song, first in Emmy-winning TV specials, then in Hollywood blockbusters from Funny Girl to Funny Lady. She goes on, as emerging auteur, to direct her own "musical concepts" in A Star Is Born—before reconceiving the big-screen musical altogether in the writing as well as directing of her own starring role in Yentl ("A Film with Music"). In this intensive reading of the "actress-who-sings," Garrett Stewart notes the gender and ethnic stereotypes that Streisand shattered as the first openly Jewish superstar, while concentrating not just on the cultural difference she made but on the internal differentials of her unholy vocal gift—whose kinetic volatility shapes a kind of cinematic terrain all its own. Down through her filmed return to the concert stage, Stewart elicits the sinuous phonetic text of Streisand’s on-screen musical delivery in a keenly attentive mode of audition that puts into fresh perspective the indelible aura of her stardom.

Garrett Stewart, a professor of literature and cinema, is the author of many books, including four on film, most recently Cinemachines: An Essay on Media and Method.

Stewart’s style has a quality that most critical styles utterly lack: it’s thoroughly vocalizable. To appreciate its rhythms and sonorities, you practically have to speak it aloud. That is why his voice has just the right pitch for writers, such as Dickens and Poe, whose prose has a likewise audible relation to language. One uncanny surprise in Streisand: The Mirror of Difference is that Stewart’s voice proves so rich an instrument for rendering the voice of a singer. He listens to the great voice of Barbra Streisand like no one else.

– D. A. Miller, author of Hidden Hitchcock and Place for Us: Essay on the Broadway Musical