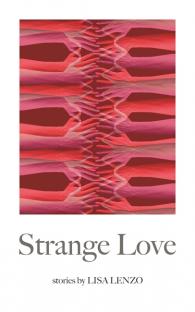 Lenzo's portraits of Annie and her men are polished, raw, infuriating, and sympathetic, all at the same time.

The nine stories of Strange Love center on Annie Zito, a smart-but-not-always-wise divorced mother, and Marly, her strong yet vulnerable daughter, as they seek and stumble upon an odd cast of boys and men. All the stories are linked and alternate between mother and daughter; and while each tale stands alone, together they make up a larger whole. The first story begins when Annie is thirty-one years old and Marly is eight and they live in a tiny apartment overlooking a marsh near Lake Michigan, and the last story ends a decade and a half later with both women on the cusp of new adventures.

Throughout these years, mother and daughter struggle with male characters: the hot-headed teenager next door, a therapist with a faulty heart, a homeless man who occupies the daughter’s porch, a divorced professor trying his wings, a flatterer who becomes abusive, a brilliant and neurotic doctor, a schizophrenic photographer, an engineer in love with comedy. Yet the women also clash with each other as Annie tries to protect her child and find a lasting relationship with a man, and Marly learns how to navigate and survive the romantic and sexual arena and find her place in the larger world. Annie’s deceased firstborn baby daughter is a darker thread woven through these stories, a subtle influence who is never seen but not forgotten. And in the background as well as the foreground is Annie’s beloved Lake Michigan, into whose deep waters she swims to remind herself that the world is beautiful and large and on whose frozen ice she kneels, as these pages end, in a moment that is both surprising and sublime.

By turns comical and poignant, lyrical and incisive, Strange Love displays Lenzo’s storytelling gifts at their finest. These stories will appeal to all readers of fiction.

Lisa Lenzo’s first story collection, Within the Lighted City, was chosen by Ann Beattie for the 1997 John Simmons Short Fiction Award and published by the University of Iowa Press. Lenzo’s other awards include a Hemingway Days Festival Award, a PEN Syndicated Fiction Project Award, and first prize for 2013 from the Georgetown Review. Her stories and essays have appeared in the Mississippi Review, Sacred Ground: Stories About Home, Fresh Water: Women Writing on the Great Lakes, and on NPR.

Everybody in this book is hungry for love, and nobody is hungrier than Annie Zito, but this divorced mother never loses her head and only rarely considers murder. . . . These stories will surprise you with their intensity and intimacy, and Lenzo's language will mesmerize you.

'Strange Love' is a linked story collection that follows a mother and daughter through their tricky relationships with men — and with each other. Set in small towns along Lake Michigan, the stories shift between the perspectives of Annie Zito and young Marly, both smart and gutsy women in search of connection.

While each story has an engaging plot line with a problem to be solved or conflict to be resolved, what stands out is the distinctive narrative voice Lenzo has created for Annie. It is so personal, so conversational and frank that reading Strange Love feels as if you are sitting down for a heart-to-heart talk with your best friend. In fact, these nine stories are so realistic and believable, so spot-on, that I often felt that I was reading a memoir. Lenzo also makes particularly effective use of the rarely seen southwest Michigan setting, creating a palpable sense of place that acts as another main character. . . . Lenzo has been flying below the radar of most readers, and that needs to change. Strange Love will convince you that she is deserving of far greater recognition and acclaim.

Beyond the map lies the territory within, and the characters that reside in Lisa Lenzo's rural Michigan charm with their daredevil imperative to love and lose and to seek love yet again. With the gravity and momentum of a novel, and the intensity and focus of the short story, Strange Love is pitch-perfect, a blend of comedy and pathos, folly and hope, simultaneously small-town and so big-hearted that I did not, upon turning the final page, want this book to end. A storyteller of unusual powers.

– Jack Driscoll, author of The World of a Few Minutes Ago (Wayne State University Press, 2012)

The narrative of a conventional novel also becomes the design of its main character’s life. But in Lisa Lenzo’s Strange Love—a novel-in-stories—her character, Annie, who yearns for love to shape her life, finds love to be elusive and all but shapeless. It is that kind of challenging honesty that informs and distinguishes this intimate book along with Lenzo’s dependably wise humor, her vivid and credible character portraits, and her charming way with anecdotes—in other words, with her consummate skill as a storyteller.

– Stuart Dybek, author of I Sailed with Magellan

As her stories jump neatly forward in time and Annie and Marly’s mother-daughter dynamic cycles through phases adorable, malevolent, terrifying, and simpatico, Lenzo choreographs disastrous relationships for both women. Down-to-earth Annie is irresistible, from the solace she finds in her "beloved" Lake Michigan to her stunning candor about sex with her slippery, neurotic, cruel, and charming lovers. Lenzo raises authenticity to an art form in these fluid, smart, and commanding stories of love strange and transforming.

. . .Great stories – they're subtle, they sneak humor in when you're not expecting it, they don't have BIG moment smacking the reader about the head three or four times – they don't need to. I'm very much looking forward to seeing where Annie and Marly head in the other seven stories.

Strange Love's appealing protagonists – divorced writer Annie Zito and her gutsy daughter, Marly – gracefully deal with one high maintenance man after another in these linked short stories. . . As a narrator, Annie describes their moments in a style that's both modest and spare. . . her observational nature is a gift to readers, and her piercing insights will make you better appreciate not just Annie and Marly's world, but your own.

Strange Love is a hard book to put down—an effect which might take some by surprise: after all, these first-person stories are serial episodes in the love life of a woman writer in middle age, who already has the room of her own and the first book, but wants—fiercely—a love of her own into the bargain. Why is this so fascinating? First, Lisa Lenzo writes (has always written) with a rare directness and candor, not so much about sex (although sex is definitely part of the deal, in Strange Love) as about the hunger for attachment, and the lengths to which a strong and independent woman might go to satisfy it. Second, there’s something at once shocking and deeply familiar about the parade of interesting yet damaged men who present themselves to a woman over forty in the market for a second marriage. Lenzo’s portraits of Annie and her men are polished, raw, infuriating, and sympathetic, all at the same time.

Everybody in this book is hungry for love, and nobody is hungrier than Annie Zito, but this divorced mother never loses her head and only rarely considers murder. Annie’s voice beguiles us with the details of doomed relationships with men who turn out to be eccentrics, neurotics, and commitment-phobics, as well as those who simply decide they want somebody else. ‘Weirdos and whackos,’ declares Annie’s daughter Marly, who sometimes delights us with her forthrightness and at other times frightens us with her vulnerability as she deals with friends and lovers in her own life. And while this mother-daughter relationship is bumpy at turns, its constancy provides counterpoint to their romantic struggles. These stories will surprise you with their intensity and intimacy, and Lenzo’s language will mesmerize you.

4 hours 17 min ago
Happy Pub Date to THE SPOOK WHO SAT BY THE DOOR, SECOND EDITION! This new edition of a literary classic now includ… https://t.co/XrCsLZvf4D
4 hours 20 min ago
RT @DarkProjections: Returned from a great two weeks in Europe to find copies of my new book! Kolchak:The Night Stalker, one of the Pion… https://t.co/kPJ5kKLRyr
1 day 1 hour ago
RT @oneitadetroit: Thrilled that @WSUPress is releasing the 2E of Sam Greenlee's "The Spook Who Sat by the Door" tomorrow. Introductio… https://t.co/hZpAjxluIl