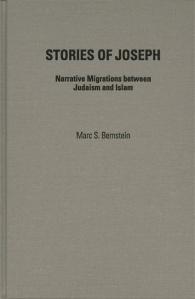 Narrative Migrations between Judaism and Islam

By investigating a wide range of literary phenomena specifically to the Joseph story and providing a readable translation, this study is of value and interest to all students of religion.

The last century has seen the demise of age-old Jewish communal life in the Arab world, and there is now a struggle to overcome a mutual lack of understanding between the West and the Arab-Muslim world. Over the course of past centuries, there was a great sharing of creative and scientific knowledge across religious lines. Stories about biblical figures held to be prophets by both Judaism and Islam are one result of this relationship and reflect an environment where not only literary genre and modes of interpretation but particular motifs could be utilized by both religious traditions. Stories of Joseph details this historical interdependence that reveals much about common experiences and concerns of Jews and Muslims. Marc S. Bernstein's rich analysis focuses on the nineteenth-century Judeo-Arabic manuscript The Story of Our Master Joseph--a Jewish text taking its form from an Islamic prototype (itself largely based on midrashic, Hellenistic, and Near Eastern material) extending back to the earliest human stories of parental favoritism, sibling rivalry, separtism from loved ones, sexual mores, and the struggles for a continued communal existence outside the homeland.

The Judeo-Arabic text [Bernstein] has studied is generally not well known and is quite remarkable. . . . Aside from its usefulness for scholars, the tale of Joseph as presented here is a fascinating story and one that many others will be interested in reading if only just for pleasure."

At the end of the work, the reader is left not only with a deeper understanding of a particular text but also an appreciation of how that text emerged from a cacophony of voices within Judeo-Arabic culture.

The remarkable text examines fundamental human relationships extending back to the earliest human stories of parental favoritism, sibling rivalry, and separation from loved ones, sexual mores, and the struggle for continued communal existence outside of the homeland. Bernstein illuminates the interpretive process and the relationship between text and metatext, specifically within the worlds of Judaism and Islam, as well as generally. By investigating a wide range of literary phenomena specifically to the Joseph story and providing a readable translation, this study is of value and interest to all students of religion.

Readers interested in the Joseph story and in a comparison of Jewish and Islamic exegesis will find Bernstein's study to provide valuable insights. Perhaps more significantly, readers interested in texts as cultural artifacts illustrating complex living worlds inhabited by people with equally complex historical and primordial ties, should find Bernstein's work a model of how historians can 'read' a text to disclose culture."