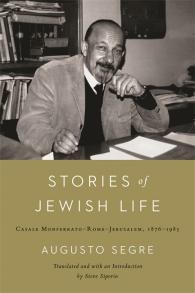 Augusto Segre
Translated and with an Introduction by Steve Siporin

Stories of Jewish Life: Casale Monferrato-Rome-Jerusalem, 1876–1985 is an unconventional memoir—an integrated collection of short stories and personal essays. Author Augusto Segre was a well-known public figure in post–WWII Italy who worked as a journalist, educator, scholar, editor, activist, and rabbi. He begins his book with stories shaped from the oral narratives of his home community as it emerged from the ghetto era, continues with his own experiences under fascism and as a partisan in WWII, and ends with his emigration to Israel. Spanning the years 1876 (one generation after emancipation from the ghetto) to 1985 (one generation after the Shoah), Segre presents this period as an era in which Italian Jewry underwent a long-term internal crisis that challenged its core values and identity. He embeds the major cultural and political trends of the era in small yet telling episodes from the lives of ordinary people.

The first half of the book takes place in Casale Monferrato—a small provincial capital in the Piedmont region in northwest Italy. The second half, continuing in Casale in the late 1920s but eventually shifting to Rome then Jerusalem, follows the experiences of a boy named Moshè (Segre’s Jewish name and his stand-in). Moshè relates episodes of Italian Jewry from the 1920s to the 1980s that portray the insidiousness of fascism as well as the contradictions within the Jewish community, especially in its post-ghetto relationship to Italian society. The painful transformation of Italian Jewry manifests itself in universal themes: the seductiveness of modern life, the betrayal of tradition, the attraction of fashionable political movements, the corrosive effects of totalitarianism, and ultimately, on the positive side, national rebirth and renewal in Israel. These themes give the book significance beyond the "small world" from which they arise because they are issues that confront any society, especially those emerging from a traditional way of life and entering the modern world.

Students, scholars, and readers of Jewish history, Italian history, and fiction with an autobiographical thread will find themselves captivated by Segre’s stories.

Steve Siporin is professor emeritus of folklore at Utah State University. His books include his translation of Augusto Segre’s Memories of Jewish Life: From Italy to Jerusalem, 1918–1960; Worldviews and the American West: The Life of the Place Itself, editor, with Polly Stewart, C. W. Sullivan III, and Suzi Jones; and American Folk Masters: The National Heritage Fellows.

Until now, Augusto Segre’s memoir had been a little-known treasure trove of first-hand information, from minute details to big ideas, about a bygone era in the history of Italian Jewry and its important tradition of cultural pluralism. Spanning local history and global concerns, the events narrated in this volume touch on personal, communal and national events that are both captivating and far too relevant to the status of minorities in today's world.

Augusto Segre’s work reads like a collection of poems. Its core is personal experience, a Jew’s perspective on daily life and characters in the Italian countryside, which is itself a lively gallery of portraits of the past, but the writing broadens into an understanding of the nuances of human experience. To add to this, Segre's pages afford a rare compelling glimpse of nineteenth-century Italian Judaism and Jewry. Stories of Jewish Life is straightforward, well written, and illuminative for both the scholar and the general reader.