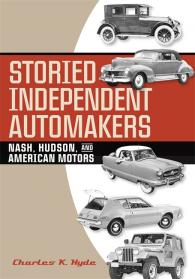 With roots extending back to the first decade of the twentieth century, Nash Motor Company and the Hudson Motor Car Company managed to compete and even prosper as independent producers until they merged in 1954 to form the American Motors Company, which itself remained independent until it was bought in 1987 by the Chrysler Corporation. In Storied Independent Automakers, renowned automotive scholar Charles K. Hyde argues that these companies, while so far neglected by auto history scholars, made notable contributions to automotive engineering and styling and were an important part of the American automobile industry.

Hyde investigates how the relatively small corporations struggled in a postwar marketplace increasingly dominated by the giant firms of Ford, General Motors, and Chrysler, which benefited from economies of scale in styling, engineering, tooling, marketing, and sales. He examines the innovations that kept the independents' products distinctive from those of the Big Three and allowed them to survive and sometimes prosper against their larger competitors. Hyde also focuses on the visionary leaders who managed the companies, including Charles Nash, Roy D. Chapin, Howard Coffin, George Mason, George Romney, and Roy D. Chapin Jr., who have been largely unexamined by other scholars. Finally, Hyde analyzes the ultimate failure of the American Motors Company and the legacy it left for carmakers and consumers today.

Charles K. Hyde's Storied Independent Automakers is the author's latest foray into the area of automotive business history, following work on the Chrysler Corporation and the Dodge brothers. Hyde's prose flows effortlessly, and the book's readability is further enhanced by a chronological narrative that features lucid introductions and conclusions, In sum, although specific brands and models are frequently described, it is people-leaders as well as members of the rank and file-who drive this history.

Here it is, the first book devoted to the complete history of the cars we love, the Jeffrey, Nash, and American Motors. This must read includes the most important part as well, the many people behind these great autos. As if it all wasn't enough, part of the book covers the very interesting story of Hudson's history from the beginning. The author's attention to accuracy, interesting detail and thoroughness is evident throughout the book. Perusing the preface gives an inkling of the in-depth effort throughout the book. This book has no peer.

Storied Independent Automakers, by automotive historian and author Hyde is so well researched and engagingly written that the reader feels as though he or she just left a business meeting in 1922 and needs to do something about the production numbers (which are often supplied and placed in context). The numerous black-and-white photographs and many tables are always appropriate and appreciated. The Wayne State University Press production values are first-rate. A very important contribution to the growing body of works on automotive history.

A story of rebellion and being big contributors to the development of the modern car, Storied Independent Automakers is a must for any automobile historian.

A scholarly but very readable history of Nash, Hudson, and American Motors. Hyde's mastery of both business and technological history is exceptional, and his attention to biographical detail brings the story to life. This book is filled with astute assessments of management decisions, automobile designs, and marketing strategies. Hyde shows that even the losers in highly competitive industries can make important contributions.

That the stories of Nash, Hudson, and American Motors have not yet been fully told in academic literature is a glaring oversight. Storied Independent Automakers fills in a major gap in our knowledge.

– David N. Lucsko, managing editor of Technology and Culture and instructor of technological history at University of Detroit-Mercy

Charles K. Hyde has rescued American Motors and its ancestors Nash and Hudson from the dusty attic of automotive history. He brings us the engaging stories of engineers, managers, and stylists who needed all the wit and resourcefulness they could muster during their companies' spirited, protracted, but ultimately doomed battles with Detroit's then dominant 'Big Three.'"

– Robert Casey, curator of transportation at The Henry Ford and author of The Model T: A Centennial History

2 days 19 min ago
Now a National Jewish Book Award Finalist! @JewishBook https://t.co/qTKAeUEPVX
2 days 3 hours ago
RT @Steph_Steinberg: Tomorrow @ 7 p.m.! Join me and @DETWritingRoom at The Whitney for our first #2023AuthorSeries event ft. @waynestate… https://t.co/pssbi2NLNs
6 days 5 hours ago
SAVE THE DATE! Join author Desiree Cooper and illustrator Bec Sloane this Saturday for a behind the scenes look at… https://t.co/cKDBmbewOa