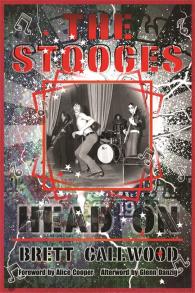 Head On, A Journey through the Michigan Underground

Like the band it chronicles, Head On is a direct, quick shot. Callwood doesn't dive into flowery hyperbole and never oversells the group...Head On makes the case for the Stooges' relevance, then and now.

If the MC5 were Detroit’s political spokesmen for the disenchanted youth of the 1960s, then the Stooges were the loutish kids, heckling from the back of the room. While conventional wisdom says they could barely play their instruments, the Stooges left an indelible mark on the world of punk rock, and the band’s initial three albums—The Stooges, Fun House and Raw Power—are bona fide classics. In The Stooges: Head On author Brett Callwood treats the band’s story not just as an early chapter in the career of its famous front man, Iggy Pop, but from the Stooges’ beginnings at the end of the 1960s, to its end in the early 1970s, and to its reunion in 2003 through the present.

In compiling this exhaustive account of the band’s history, Callwood interviewed all of the central and sometimes Stooges members, including Iggy Pop, Ron and Scott Asheton, James Williamson, Mike Watt, Steve Mackay, and Scott Thurston, and largely lets the band tell its own story in numerous long quotes. Callwood details the band’s genesis as teenage friends in Ann Arbor, their time living together in their legendary party houses in the 1960s, and the recording of the three original Stooges albums. He examines the addition of James Williamson to the band on Raw Power and how it changed the band’s sound and dynamic, along with the band’s fateful meeting with David Bowie on its first British tour. As Iggy broke out as a solo artist during the 1970s and 1980s, Callwood charts the Asheton brothers’ post-Stooges experiences, with Ron’s turns in The New Order, Destroy All Monsters, and Dark Carnival, and Scott Asheton’s time with the Farleys and Sonic’s Rendezvous Band. He also provides an overview of Iggy’s solo career, the seeds of a reunion that were planted with a collaboration on Iggy’s Skull Ring album, and the eventual reformation of the band and the recording of their fourth album, The Weirdness, in 2004.

Originally published in the U.K. in 2007, The Stooges: Head On has been revised to expand on the original story and also to consider Ron Asheton’s untimely death in 2009 and his musical legacy, the band’s fate without Ron, and the Stooges’ long-overdue introduction into the Rock and Roll Hall of Fame in 2010. Fans of the Stooges and those interested in the roots of punk music will enjoy this intimate and informative volume.

Brett Callwood is a music journalist whose work has appeared in the Metro Times, Metromix, Modern Drummer, and Classic Rock, among other publications. His first book, MC5: Sonically Speaking, was published in the U.S. by Wayne State University Press in 2010.

And while an unabashed fan, author Callwood - who also penned The MC5: Sonically Speaking - also brings solid journalistic cred to the pages, buoyed by his original interviews with most band members, related musicians and scenesters.

The drugs! The debauchery! The decadence! The wild-man performances from Iggy Pop, a man with a taste for peanut butter-not to eat, but to smear on his chest-and broken glass, which he likewise worked into his flesh while on stage. It's all here in Brett Callwood's exhaustive account of the rise and demise of the Stooges, the Michigan band who effectively invented punk rock."

Like the band it chronicles, Head On is a direct, quick shot. Callwood doesn't dive into flowery hyperbole and never oversells the group. While it would have been nice to see a wider interview pool or more facts about the band's early days, Head On is still a concise, cohesive read. If you're a fan, the middle chapters about lesser known pursuits will hook you. If you want to explore punk rock beyond the Ramones and the Sex Pistols (and you really should, poser), Head On makes the case for the Stooges' relevance, then and now.

Callwood gets Detroit in ways that most people from outside the area never will. It is/was a City of underdogs, hard scrabble survivors, and chips on shoulders bigger than the sculpture of Joe Louis fist that sits outside Detroit City Hall; of cold beer, freezing winters, and more square footage of bowling alleys than anywhere in the nation. It is the birthplace of the labor movement, a case study in the economic devastation that is sure to follow a one-dimensional economic base (the auto industry), and a City that lost 800,000 people from its peak of 1.7 million in the mid-1950s. Detroit is also a City of revolutionaries, militants, proud renegades, talented musicians, independent artists, and a type of person for which West Coast image-consciousness, East Coast pretension, and soft underbellies are anathema. And all of it pours out of the real life characters examined by Callwood in this eminently readable and penetrating document of Motor City rock history.

With each 'Stooge' getting close to equal billing, Callwood's research results in a thorough exploration-and explanation-of the band's seismic importance to the Detroit music scene. Interesting, amusing, and engaging, The Stooges will enlighten even the biggest Stooges fan."

It's a good book. I thank you for writing it."