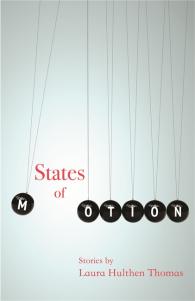 Newton's Laws of Motion describe how bodies work to balance forces outside their control. For the men and women in States of Motion, imbalance is a way of life. Set in Michigan small towns both real and fictional, the stories in Laura Hulthen Thomas’s collection take place against a backdrop of economic turmoil and the domestic cost of the war on terror. As familiar places, privilege, and faith disappear, what remains leaves these broken characters wondering what hope is left for them. These stories follow blue collars and white, cops and immigrants, and mothers and sons as they defend a world that is quickly vanishing.

The eight stories in States of Motion follow tough, quixotic characters struggling to reinvent themselves even as they cling to what they’ve lost. A grieving father embraces his town’s suspicions of him as the sole suspect in his daughter’s disappearance. A driving instructor struggles to care for his abusive mother between training lessons with two flirtatious teens. A behavioral researcher studying the fear response must face her own fears when her childhood attacker returns to ask for her forgiveness. Conditioned by their traumatic pasts to be both sympathetic and numb to suffering, the characters in these stories clutch at a chance to find peace on the other side of terror. From the isolated roadways of Michigan’s countryside to the research labs of a major university, the way forward is both one last hope and a deep-seated fear.

The profoundly emotional stories in States of Motion will interest any reader of contemporary literary fiction.

Laura Hulthen Thomas’s short fiction and essays have appeared in a number of journals and anthologies, including The Cimarron Review, Nimrod International Journal, Epiphany, and Witness. She received her MFA in fiction writing from Warren Wilson College. She currently heads the undergraduate creative writing program at the University of Michigan’s Residential College, where she teaches fiction and creative nonfiction.

The stories in States of Motion are a revelation: harrowing, tender, full of moments of everyday unease and menace. Laura Hulthen Thomas is a master at rendering characters undone by what life has thrown at them and by what they’re capable of doing in response. As with the very best fiction, the results are both surprising yet inevitable, and we are amazed, again and again in these stories, at what can be contained in the human heart, and at what can spill out. A debut collection not to be missed.

– CJ Hribal, author of The Company Car and The Clouds in Memphis

You will engage with these characters from the edge of your seat, as Laura Hulthen Thomas reveals their constant state of motion between memories of the past and present complex circumstances. Their futures remain uncertain. Yours may, too, after you read their stories.

Stories can feel too careful, built rigidly around a single moment when the other shoe drops. Not these: Laura Hulthen Thomas fearlessly drops whole closets full of shoes, one after another, in these generous, spacious stories. She makes room on the page for all the complexities of real life.

– Caitlin Horrocks, author of This Is Not Your City

States of Motion shimmers with a quiet lyricism that transforms the stuff of ordinary life into pure magic. Laura Hulthen Thomas’s stories remind us that we are flawed and fragile and loving and dignified, and that every human moment contains the possibility of heart-wrenching beauty. What a lovely book this is.

– David Haynes, author of A Star in the Face of the Sky

Laura, a great teacher and promoter of fiction here in SE Michigan also has one of my favorite covers so far for 2017.

There's nothing flashy or startling about Laura Hulthen Thomas's short fiction, but her sturdily constructed stories will appeal to a wide group of thoughtful readers.

Thomas generously gives us the whole messy life. This is deeply satisfying, but you have to pay attention. [ . . . ] Her many Michigan settings are varied, detailed, and familiar to us. She is adept at giving us a character in a few words. They feel like people we have all known. Their thoughts have often been our thoughts, and their secrets are not far from our own.

Thomas does something different. Just when she has you drawn in to one expectation, she will shift the focus, add a plot turn, or change a character dramatically. This kind of movement takes some time to develop [ . . . ] The texture and completeness [each story offers] is the great gift of this collection.

In States of Motion, Thomas delivers authentic settings in small towns struggling under the weight of economic hardship, intricate conflicts with no easy solutions, and characters who are reasonably angry, restless, irritated, confused, apathetic, or heartbroken. They are not always likable, but they are knowable, and the author consistently renders their struggles with accuracy and compassion.

...these are some fantastic stories. I’m particularly enamored of the way Thomas goes all in on her narratives, drawing out the main action so expertly that you want to dwell longer in these worlds, dive deeper into their backstories. One of the most effective ways she does that is to hit her characters with multiple stressors, like the woman in "State of Motion" who’s trying to coach her son through a school competition while sorting out her extramarital affair with the janitor, or the driving instructor in "Adult Crowding" scrambling to cope with his dying mother while taking two argumentative teens out on a driving lesson.

What Laura does though that makes this collection so exceptional is the empathic connection she provides us into these character's cores, into their wounded souls and broken hearts. Her distinctive knack for showing us just what we need to see in order to be completely engrossed by these men, women, and their children cannot be understated...Perhaps most importantly, Laura writes with a strong, confident prose that avoids sounding preachy and is entirely approachable, echoing the voices of the Midwest...I cannot recommend STATES OF MOTION strongly enough!

Lauren Hulthen Thomas spins long tales, spending a lot of time growing the characters in States of Motion, her debut collection. I’ve read a lot of shorts lately, and lots of books with nuanced syntax and prose. It’s good to find a book with long stories that really take the time to write out that backstory, to explore each and every one of the character’s thoughts, to tie all of it to the frontstory as effectively as Thomas does. These are solid, compelling stories, and I’m glad I spent time with them today.