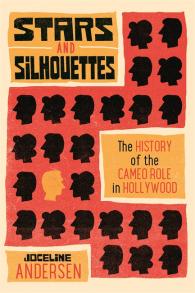 The History of the Cameo Role in Hollywood

Stars and Silhouettes: The History of the Cameo Role in Hollywood traces the history of the cameo as it emerged in twentieth-century cinema. Although the cameo has existed in film culture for over a century, Joceline Andersen explains that this role cannot be strictly defined because it exists as a constellation of interactions between duration and recognition, dependent on who is watching and when. Even audiences of the twenty-first century who are inundated by the lives of movie stars and habituated to images of their personal friends on screens continue to find cameos surprising and engaging. Cameos reveal the links between our obsession with celebrity and our desire to participate in the powerful cultural industries within contemporary society.

Chapter 1 begins with the cameo’s precedents in visual culture and the portrait in particular—from the Vitagraph executives in the 1910s to the emergence of actors as movie stars shortly after. Chapter 2 explores the fan-centric desire for behind-the-scenes visions of Hollywood that accounted for the success of cameo-laden, Hollywood-set films that autocratic studios used to make their glamorous line-up of stars as visible as possible. Chapter 3 traces the development of the cameo in comedy, where cameos began to show not only glimpses of celebrities at their best but also of celebrities at their worst. Chapter 4 examines how the television guest spot became an important way for stars and studios to market both their films and stars from other media in trades that reflected an increasingly integrated mediascape. In Chapter 5, Andersen examines auteur cameos and the cameo as a sign of authorship. Director cameos reaffirm the fan’s interest in the film not just as a stage for actors but as a forum for the visibility of the director.

Cameos create a participatory space for viewers, where recognizing those singled out among extras and small roles allows fans to demonstrate their knowledge. Stars and Silhouettes belongs on the shelf of every scholar, student, and reader interested in film history and star studies.

Joceline Andersen is an Assistant Teaching Professor in Communication and English at Thompson Rivers University. Her research focuses on audience reception, community building through moving images, and popular cinema.

This wonderful book is fascinating, original, and comprehensive. Andersen expertly maps the shifting role of the cameo in both promoting and undermining the aura of the media celebrity. Her deep insight into every phase of film and television history, from the earliest silent cinema to our era of internet fan sites, makes this a major contribution to media scholarship.

– Will Straw, author of Cyanide and Sin: Visualizing Crime in 50s America

As small roles with big impacts, cameos destabilize and reveal. So does Stars and Silhouettes, a comprehensive overview of the role, function, and deceitful pleasures of cameo appearances. This book is meticulously researched, innovative, informative, and fun to read. Andersen checks names, unveils performances, and presents a treasure troveof the transformative movie–experience offered by the cameo.

What Andersen does excellently in this well-researched and informative book is chart how film studios, TV channels and film stars have harnessed the cameo in different ways over the years to engage and enthuse the consumers of their products.

Andersen has created a compelling
monograph about the cameo across screen history, from the origins of the
star system to the end of the studio system, and from network television to ondemand
viewing and the online circulation of videos featuring cameos. She has
admirably condensed the history of the cameo, in its many forms, into just over
200 pages, an achievement in itself.