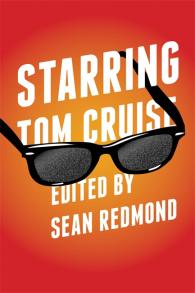 Starring Tom Cruise examines how Tom Cruise’s star image moves across genres and forms as a type of commercial product that offers viewers certain pleasures and expectations. Cruise reads as an action hero and romantic lead yet finds himself in homoerotic and homosocial relationships that unsettle and undermine these heterosexual scripts. In this volume, editor Sean Redmond shows how important star studies is not just to understanding the ideological, commercial, and cultural significance of one star but to seeing how masculinity, ethnicity, sexuality, and commodity relations function in contemporary society.

The volume is divided into three parts. Part 1 explores the ways that Cruise’s star image and performances are built on a desiring gaze, nearly always complicated by perverse narrative arcs and liminal character relationships. This section also explores the complex and contradictory ways he embodies masculinity and heterosexuality. Part 2 places Cruise within the codes and conventions of genre filmmaking and the way they intersect with the star vehicle. Cruise becomes monomythical, heroic, authentic, and romantic, and at the same time, he struggles to hold these formulas and ideologies together. Part 3 views Cruise as both an ageless totemic figure of masculinity who does his own stunts, as well as an aging star—his body both the conduit for eternally youthful masculinity and a signifier of that which must ultimately fail. These readings are connected to wider discursive issues concerning his private and public life, including the familial/patriarchal roles he takes on.

Scholars writing for this collection approach the Cruise star image through various vectors and frames, which are revelatory in nature. As such, they not only demonstrate the very best traditions of close "star" textual analysis but also move the approach to the star forward. Students, scholars, and readers of film, media, and celebrity studies will enjoy this deep dive into a complex Hollywood figure.

Sean Redmond is professor of screen and design at Deakin University, Australia. He is the author of Celebrity, Liquid Space: Science Fiction Film and Television in the Digital Age, Celebrity and the Media, and The Cinema of Takeshi Kitano: Flowering Blood. He is the founding editor of Celebrity Studies, short-listed for best new academic journal in 2011.

Love him or loathe him, there is no denying that Tom Cruise has been one of the world's biggest movie stars for a long time. As such, he deserves serious scholarly attention, and this book provides it with fifteen smart essays that adroitly address just about every imaginable facet of the star's cultural, sexual, and symbolic resonance.

– Gaylyn Studlar, author of This Mad Masquerade: Stardom and Masculinity in the Jazz Age

Sean Redmond’s first-rate edited collection offers detailed consideration of the most important roles in Cruise’s successful decades-long career. This wide-ranging volume also covers essential new ground for the analysis of contemporary Hollywood stardom. Its insightful cross-disciplinary examination of the star’s perpetual border crossing makes this book an unmissable read. Stars like Tom Cruise never seem to lose their shine. This book enables us to understand why.

The contributors analyze Cruise’s appearance, his affect, the surrounding discourses, and films’ presentation of the actor in ways that illuminate the various aspects of his stardom and the society and industry that have made him a star for forty years.

This is a book that star studies has wanted, even if we didn’t know it—a wide-ranging set of reflections on the desirability, authenticity, and dogged agelessness of contemporary Hollywood’s ubiquitous genre king. As equally attuned to the white, masculine normativity of Tom Cruise as to his performative excess, sexual indeterminacy, and spiritual eccentricity, this book advances star studies by elucidating a changing Hollywood landscape through the cultural continuity of its most tenacious star.

Finished reading Starring Tom Cruise today. I highly recommend it to scholars working in star/celebrity studies. Each essay in Redmond's collection offers new approaches to thinking about Tom Cruise's stardom. The approaches used include focus on his masculinity, aging body, queerness of his stardom, and his importance as part of IP focus of Hollywood. Redmond's collection offers a model which scholars working on stardom/celebrity could use to develop future projects.

Moreover, as well as textual analysis of Cruise’s films, the contributors use a wide range of press coverage, biographies, documentary, websites, reality television and social media posts, alongside academic literature, to explore Cruise’s complex image and longevity as a star. An excellent read for those both familiar and unfamiliar with Cruise and his work.

What this new volume gets right is its insistence that Cruise’s stardom isn’t peripheral to the films in which he acts. Instead, that stardom indelibly shapes and limits the sort of interpretations his films occasion.

9 hours 22 min ago
In honor of the #CityofDetroit turning 321 years old on July 24th, WSUPress will be showcasing one Detroit Book of… https://t.co/PA7nONh4C0
14 hours 25 min ago
OUR FALL & WINTER 2022 TITLES ARE NOW AVAILABLE FOR PRE-ORDER! Grab your copy of any of our fall & winter titles f… https://t.co/qDykAsF9sk
2 days 15 hours ago
Happy Pub Date to THE SPOOK WHO SAT BY THE DOOR, SECOND EDITION! This new edition of a literary classic now includ… https://t.co/XrCsLZvf4D