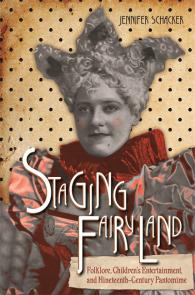 In nineteenth-century Britain, the spectacular and highly profitable theatrical form known as "pantomime" was part of a shared cultural repertoire and a significant medium for the transmission of stories. Rowdy, comedic, and slightly risqué, pantomime productions were situated in dynamic relationship with various forms of print and material culture. Popular fairy-tale theater also informed the production and reception of folklore research in ways that are often overlooked. In Staging Fairyland: Folklore, Children’s Entertainment, and Nineteenth-Century Pantomime, Jennifer Schacker reclaims the place of theatrical performance in this history, developing a model for the intermedial and cross-disciplinary study of narrative cultures.

The case studies that punctuate each chapter move between the realms of print and performance, scholarship and popular culture. Schacker examines pantomime productions of such well-known tales as "Cinderella," "Little Red Riding Hood," and "Jack and the Beanstalk," as well as others whose popularity has waned—such as, "Daniel O’Rourke" and "The Yellow Dwarf." These productions resonate with traditions of impersonation, cross-dressing, literary imposture, masquerade, and the social practice of "fancy dress." Schacker also traces the complex histories of Mother Goose and Mother Bunch, who were often cast as the embodiments of both tale-telling and stage magic and who move through various genres of narrative and forms of print culture. These examinations push at the limits of prevailing approaches to the fairy tale across media. They also demonstrate the degree to which perspectives on the fairy tale as children's entertainment often obscure the complex histories and ideological underpinnings of specific tales.

Mapping the histories of tales requires a fundamental reconfiguration of our thinking about early folklore study and about "fairy tales": their bearing on questions of genre and ideology but also their signifying possibilities—past, present, and future. Readers interested in folklore, fairy-tale studies, children’s literature, and performance studies will embrace this informative monograph.

Jennifer Schacker is associate professor in the School of English and Theatre Studies at the University of Guelph and the author of National Dreams: The Remaking of Fairy Tales in Nineteenth-Century England. Her collaborations with Christine A. Jones include Marvelous Transformations: An Anthology of Fairy Tales and Contemporary Critical Perspectives and Feathers, Paws, Fins, and Claws: Fairy-Tale Beasts (Wayne State University Press, 2015).

Is there more to say about the folktale? Yes! And Schacker says it astutely and beautifully; examining the history of the folktale through the lens of pantomime and theatricality in the nineteenth century, Schacker reveals the meaning of materiality in performances on stage and in costume. From conceptions of childhood to cross-dressing, Schacker redeems the folktale from its current cinematic commodifications and gives it back to us in rich historical and performative detail, rereading and creatively revising the history of folktale scholarship in the process. Essential and engaging work!

Jennifer Schacker’s Staging Fairyland is a historical landmark book that expands our understanding of the intertextuality and interconnections of folklore and fairy tale. Brilliantly conceived and written, Schacker’s study of the fairy-tale pantomime in the nineteenth century is a major contribution to interdisciplinary studies and the study of folklore and fairy tales. Her book fills major gaps in the history of the fairy tale as a pervasive and memetic genre. Indeed, it will contribute to our contemporary reconfiguration of the fairy tale by demonstrating how performance genres like the pantomime are part and parcel of this messy, magical genre. In this respect, Schacker is a scholarly wizard who has transformed the invisible into clear visibility.

Staging Fairyland is discipline-crossing, horizon-expanding scholarship at its imaginative best. Schacker’s wide-ranging exploration of the experience of fairy tales across media and modalities of performance, from print to pantomime, scholarly imagining to popular entertainment, offers a powerful critical corrective to conventional disciplinary divisions of intellectual labor. This book has the potential to revolutionize the historiography of folklore.

Staging Fairyland tells the engrossing story of two disciplines, folklore studies and theater studies, that ought to have partnered long ago but haven’t even been properly introduced to one another until now. Had they found each other earlier, they certainly would have discovered what Jennifer Schacker has so convincingly proved: long before Victorians coined the word folklore and ushered in the ‘golden age’ of children’s literature, fairy tales abounded onstage in the fantastic plots and magical characters of English pantomime, and they continued to thrive there even as folklorists sought for greater authenticity in the field, eschewing the limelight and tinsel but hearing essentially the same tales. This is interdisciplinary research of the highest order and a dream come true for scholarly specialists and general readers alike.

Essential, overdue, and brilliantly conceived, Staging Fairyland explores the British pantomime tradition of enacting fairy tales. Jennifer Schacker demonstrates that the verbal Cinderella possesses her own, long-closeted stepchild: the children’s holiday dramas that have exerted an unacknowledged impact on the ways in which the world now visualizes and understands fairy-tale classics. Schacker presents the panto as a ‘spirit . . . that continues to haunt the history of the fairy tale’ and, thanks to her, readers will now see the tales in an added, dramatic dimension.

– Carl Lindahl, editor of Perspectives on the Jack Tales and American Folktales from the Collections of the Library of Congress

Pantomime, that long-lived but lesser-known folk theater genre, gets its full due in Jennifer Schacker’s wonderful Staging Fairyland. But more important, she uses specific details of the art—its history, narratives, fairy-tale characters, costuming, cross-dressing, satire, and subversion—to awaken the dormant discourse between folklore, theater, and performance studies. All this and more, written in Schacker’s elegant, discerning style, Staging Fairyland gives its own bravura performance ready to be enjoyed by a diverse audience of scholars, performers, educators, theater-makers, and theater-goers.

Staging Fairyland ultimately presents a concise but important contribution to fairy tale scholarship by offering a strong, interdisciplinary methodology for studying fairy tales across history. By asking her audience to consider their own preconceived notions of what fairy tales are and how to approach them as a folklorist, Schacker pushes readers beyond their contemporary conceptions into the past, where an examination of an exciting and excessive performance genre offers keys to current fairy tale research. This book serves as an invaluable guide and worthwhile read for any scholar interested in the multimedia networks in which fairy tales are situated.

Staging Fairyland is a stimulating contribution to debates within folklore studies on the transmission of narratives and the roles of multiple media in folk tradition. Schacker presents a deep analysis of a neglected dimension of British fairy lore in an important interdisciplinary volume that will be of interest to scholars of both folklore and the history of drama alike.

For me, the work’s main merit is the wonderful set of more than 27 pantomime images its pages are illustrated with.

Schacker's important book takes a complementary strike at the very heart of the field's self-mythologizing, both positive and negative. It demands that we pay fuller attention, not just outside but inside the hegemonic spaces, to the networks within which we constitute our narratives.

By recognizing the popular importance of fairy tale pantomime in the nineteenth century, Schacker also offers stimulating ground for the study of its influence in fancy dress, masquerade costumes, novelty fashions and other stage costumes during the same period. The work she does on showing how pantomime costumes underpinned many fairy tale illustrations, and commercial fancy dress designs opens new areas for costume research in related areas. The effect of live pantomime performance on audiences is reconstructed through its textual and visual responses, while highlighting the importance of this medium to wider cultural conceptions of stock character visualizations. Throughout, the complex interrelationships between stage, page and fashion are considered in fresh, invigorating ways. Staging Fairyland is innovative, inspiring, challenges some established wisdom and is highly recommended.

Jennifer Schacker’s highly focused study of fairy-tale pantomimes in nineteenth-century England is both a study of specific productions of fairy tales in dramatic form and their social context, as well as a methodological argument about the need to extend folkloristic research into theater history. The two aspects of the study reinforce each other, although they probably will appeal to different groups of readers. Readers interested in fairy tales will be reminded how they have been influenced by popular dramatizations in Walt Disney films—what folklorist Jack Zipes has called "the Disney spell"—and other non-textual forms these tales have taken. The other group of readers would consist of folklorists curious about the development of their discipline, as well as Schacker’s critique about the limitations posed by certain assumptions about transmission of fairy tales, which she argues have resulted in fairy-tale studies ignoring the very influential presence of eighteenth- and nineteenth-century pantomimes, an artistic tradition which continues in England to the present day.

– Don Riggs, Journal of the Fantastic in the Arts