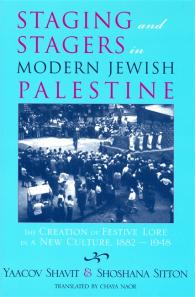 By Yaacov Shavit and Shoshana Sitton
Translated by Chaya Naor

This is an important book that makes a unique, significant contribution to research in the field.

This fascinating case study describes the work of the people responsible for creating festive lore and its system of ceremonies and festivities—an inseparable part of every culture. In the case of the new modern Hebrew culture of Eretz Israel (modern Jewish Palestine)—a society of immigrants that left behind most of their traditional folkways—the creation of festival lore was a conscious and organized process guided by a national ideology and aesthetic values. This creative effort in a secular national society served as an alternative to the traditional religious system, adapted the ceremonies and festivals to a new historical reality, and created a new festival cycle that would give expression and joy to the values and symbols of the new Jewish society.

Staging and Stagers in Modern Jewish Palestine claims that the system of ceremonies and festivals, in general, and each separate ceremony and festival were staged according to the staging instructions written by a defined group of cultural activists. The book examines three main stages—the educational network, rural society (particularly the cooperative sector), and urban society (most notably Tel Aviv)—and looks at the stagers themselves, who were schoolteachers, writers, artists, and cultural activists. Though cultural systems of festivals and ceremonies are often researched and described, scholarly literature rarely identifies their creators or studies in detail the manner in which these systems are created. Staging and Stagers in Modern Jewish Palestine sheds important light on the stagers of modern Jewish Palestine and also on the processes and mechanisms that created the performative lore in other cultures, in ancient as well as modern times.

Yaacov Shavit is professor for the Department of the History of the Jewish People at Tel-Aviv University. Among his recent publications are History in Black: African-Americans in Search of an Ancient Past (Frank Cass: London, 2001) and The War of the Tablets: The Defense of the Bible in the 19th Century and the Babel-Bible Controversy (Am Oved: Tel-Aviv, 2003 [In Hebrew]).

Shoshana Sitton is senior lecturer at the Levinsky College of Education, Tel Aviv. She is author of Education in the Spirit of the Homeland: The Curriculum of the Teachers Council for the Keren Kayement (Tel Aviv University, 1998 [In Hebrew]).

Yaacov Shavit and Shoshana Sitton offer a detailed case study on the purposeful invention of festive traditions in a society betwixt and between. The availability of the material coupled with the analysis render the work a fine study one could potentially use and debate in the upper level undergraduate or graduate classroom. The clarity of the prose, perhaps enhanced through the translation from the Hebrew, further suggests such suitability of Staging and Stagers."

In this unconventional yet very effective excursus into the social history of the interplay between Zionism and the Jewish endeavor to create a nation in Palestine, the authors examine the attempts to create and reformulate the symbols of Jewish identity in a new context. Their function in creating the necessary antecedents for political state building, as well as in reinforcing group identity of settlers, kibbutzniks, and urban merchants, among other, are well described and documented. This is an important contribution to understanding the rationale and purposefulness of ideologues and leaders in building what would become an Israeli identity.

The book contributes significantly with its detailed historical documentation and in-depth discussion of social and ideological aspects of the phenomenon in question, which was a significant, original attempt to create an authentic Hebrew Palestine folklore….this is an important book that makes a unique, significant contribution to research in the field.

[A] historical documentation of the creations of the stager-entrepreneurs, [Staging and Stagers in Modern Jewish Palestine] is a valuable contribution to our knowledge of the Yishuv and the attempts to separate from religious tradition by creating secular, functional equivalents of religious ritual."

– Don Handelman, The Hebrew University, author of Models and Mirrors: Towards an Anthropology of Public Events