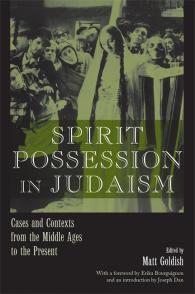 Cases and Contexts from the Middle Ages to the Present

Goldish has edited an extremely important collection of essays that promises to radically transform the way many people view Judaism.

This extraordinary collection of essays is the first to approach the phenomenon of spirit possession among Jews from a multidisciplinary perspective. What beliefs have Jews held about spirit possession? Have Jewish people believed themselves to be possessed by spirits? If so, what sorts of spirits were they? Have Jews’ conceptions of possession been the same as those of their Christian and Muslim neighbors? These are some of the questions addressed in these thirteen essays, which together explore spirit possession in a wide range of temporal and geographic contexts.
The phenomena known as spirit possession are both very widespread and very difficult to explain. The late Raphael Patai initiated study of spirit possession as found in the Jewish world in the post-Talmudic period by taking a folkloric and anthropological approach to the subject. Other scholars have opened up new avenues of inquiry through discussions of the topic in connection with Jewish mystical and magical traditions. The essays in this collection expand the variety of approaches to the subject, addressing Jewish possession phenomena from the points of view of religion, mysticism, literature, anthropology, psychology, history, and folklore. Scholarly views and popular traditions, benevolent spirits and malevolent shades, exorcism, social control, messianic implications, madness, literary structure, and a host of other topics are brought into the discussion of spirit possession in Jewish culture. This juxtaposition of approaches among the essays in this volume, some of which analyze the same texts in different ways, creates a broad foundation on which to contemplate the meaning of spirit possession.

Matt Goldish is Samuel M. and Esther Melton Associate Professor of Jewish History at the Ohio State University. His books include Judaism in the Theology of Sir Isaac Newton, winner of the Salo Baron Prize of the American Academy for Jewish Research, 2000.

Goldish has edited an extremely important collection of essays that promises to radically transform the way many people view Judaism.

Spirit Possession in Judaism offers a new and fascinating portrait of a subject usually neglected or marginalized in the study of Judaism. The work is a wonderful reflection of the new explosion of Judaic studies in the academy in its focus on a subject of great interest to students of other cultures and in the interdisciplinary way in which the subject is treated. The addition of translated primary sources on possession makes this volume especially attractive for teaching as well as for cross-cultural comparison."

For those who thought Judaism was a completely rationalistic faith, Spirit Possession in Judaism, a collection of essays studying the phenomenon of spirit possession among Jews from a multi-disciplinary perspective, will prove enlightening.

2 days 8 hours ago
Wayne State University Press is proud to announce our winner and finalists of the 2022 Next Generation Indie Book A… https://t.co/Ozy1WEQY1i
3 days 13 hours ago
Congratulations to all of the winners! https://t.co/Em8m5qoESk https://t.co/0EX9yD1vge
4 days 14 hours ago
RT @muckrack: Today's featured journalist is @fkwang, Communities Correspondent at @NewsHour. Based in Detroit, Frances covers As… https://t.co/XK9qCAOXhS