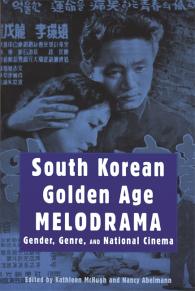 This collection is a provocative read. The authors explore an interesting period of Korean cinematic history that is informative and little know by Americans.

South Korean Golden Age Melodrama is the first English-language book to examine this era of remarkable activity, covering the specifics of the Golden Age as well as the influences it has had on contemporary South Korean film and television. Given the compressed, ambiguous, and fundamentally transnational social and political dramas of South Korea’s history, South Korean Golden Age Melodrama addresses the widespread appeal of particular film modes and aesthetics, especially that of the melodrama. These essays also examine genre in relation to articulations of nation and constructions of gender in Golden Age films and how the nation manifests itself in persistent gender and genre trouble.

Combining textual analysis, reception, and historical/cultural detail, South Korean Golden Age Melodrama skillfully renders the complexity of the Golden Age. Contributors cite both domestic and foreign films to demonstrate the generic and transnational impact of Golden Age cinema, sometimes calling into question the very integrity of "national cinema" in light of the workings of a transcultural cinema sphere during that era. With nine chapters, sustained treatments of nine canonical Golden Age films, together with extended consideration of contemporary film and television, this volume offers a rich contribution to the theorization of film genre and national cinema and their relationship to gender.

Kathleen McHugh is associate professor of English at the University of California, Los Angeles. She is author of several books, including American Domesticity: From How-To Manual to Hollywood Melodrama (Oxford, 1999).

Nancy Abelmann is associate professor of anthropology and East Asian studies at the University of Illinois at Urbana-Champaign. She is author of several books, most recently The Melodrama of Mobility: Women, Class, and Talk in Contemporary South Korea (University of Hawai’i Press, 2003).

This collection is a provocative read. The authors explore an interesting period of Korean cinematic history that is informative and little know by Americans."

Just when South Korean cinema has grabbed the global spotlight as the most successful non-Hollywood cinema, South Korean Golden Age Melodrama opens our eyes to its history. And when melodrama itself is being rethought as a historically and culturally varied mode, this volume 'gets us out of the USA,' as one critic puts it, and enables us to understand melodrama as transnationally produced but always already locally specific."