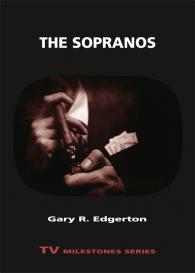 As soon as I finished the book, I went back and watched the entire series again with new insight and appreciation.

From its premiere in 1999, The Sopranos captivated viewers with its easily relatable protagonist who has troubles at work and home, and went on to be one of the most critically successful shows in television history. By demonstrating that TV could be at once artistic and profitable, complex and engaging, edifying and entertaining, the series also redefined the prime-time drama. In this volume, author Gary R. Edgerton delves into the entire run of The Sopranos, integrating the existing scholarly literature, while also going much further than any previous source in exploring the series' innovations and legacy.

First, Edgerton describes and analyzes The Sopranos' enormous business and industrial significance within the context of HBO as a network, a diversified entertainment company, and an identity brand. In chapter 2, he examines the many autobiographical influences and work experiences of creator David Chase and the narrative antecedents that informed the series' beginnings. In chapter 3, Edgerton underscores The Sopranos' deeply evocative sense of place, honing in especially on the cultural geography of New Jersey as representative of the nation as a whole. Finally, in chapter 4, Edgerton highlights how The Sopranos marks "A Midlife Crisis for the Gangster Genre" by illustrating some of the most profound generic transformations that took place over the course of the show, while his conclusion summarizes The Sopranos' ongoing industrial, aesthetic, and cultural legacy.

The Sopranos is widely recognized in both popular and scholarly literature as a turning point in the history and development of TV. Fans who want to learn more about the show and scholars of television history will enjoy this entertaining and educational volume.

Gary R. Edgerton is dean of the College of Communication at Butler University. He was previously eminent scholar, professor, and chair of the Communication and Theatre Arts Department at Old Dominion University. Edgerton has published ten books and more than eighty book chapters, journal articles, and encyclopedia essays on a wide variety of media and culture topics, and is co-editor of the Journal of Popular Film and Television.

It was back in June of 2007 that Tony Soprano ordered some onion rings, listened to some Journey, and then mysteriously disappeared forever into ten seconds of blackness and silence. Gary Edgerton's new book about The Sopranos elegantly tells the story of all the stuff that happened before that perplexing final scene. Concise analyses of the cable channel that developed and presented the show and the people who made it are followed by ingenious and creative readings of individual scenes and episodes. As soon as I finished the book, I went back and watched the entire series again with new insight and appreciation.

– Robert Thompson, director of the Bleier Center for Television and Popular Culture at Syracuse University

Gary Edgerton's The Sopranos is highly readable, informative, and well structured. It is the best book I have yet read that is entirely devoted to Chase's series.

This engaging and well-written book is, as it claims, a 'one-stop introduction to the multiple dimensions' of The Sopranos. It goes beyond a mere synthesis of existing critical and popular responses to the show by drawing on Edgerton's mastery of historical and industrial context in tandem with his sensitivity to its aesthetic innovation and achievement. Anyone interested in the show should be directed to this book's insights and analysis.

– Jason Jacobs, associate professor in the School of English, Media Studies & Art History at the University of Queensland

The text includes ample bibliographic information for American history and culture scholars with an extensive list of sources. Readers are left reminiscing as they engage in '…viewing parties in homes, bars, and restaurants around the country,' allowing participants to experience The Sopranos in a tangible, visceral way rather than simply watching the show (16). Even as the series has ended, readers may enjoy the box set series alongside this straightforward text. Perhaps they will share a table of Italian fare, good conversation, and a night with family and friends.

Edgerton's neatly-turned overview admirably achieves its aim of affording a ‘one-stop introduction’, perhaps for those people interested in contemporary culture who are not devotees of television. Besides providing a succinct summary of the key features of the programme's compositional principles as they emerged over the six seasons of the drama, this TV Milestone volume also locates The Sopranos in its broader institutional and social context.