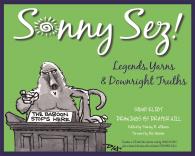 Sonny Sez! contains one hundred one-minute stories from Sonny Eliot, popular broadcaster and Detroit personality. Well known for his weather segments on WWJ-TV (now WDIV) and for hosting a variety of programs including At the Zoo and the annual Hudson’s Thanksgiving Day Parade broadcast, Eliot’s unique weather presentation can currently be heard on WWJ Newsradio 950 in Detroit. The stories included in this volume were carefully selected from over 750 that Sonny broadcast on his syndicated radio show over the years and concern "the strange, the humorous, and the useless."

Sonny’s stories address questions like, why do empty rooms get dusty? What is the meaning and origin of the phrase "the whole nine yards"? And why is a dog’s nose moist? The answers are often fascinating, and Sonny promises that they are also mostly true. Sonny’s trademark wit and wisdom is enhanced by over seventy amusing illustrations from renowned political cartoonist Draper Hill. Hill’s intricate and humorous drawings bring Sonny’s stories to life, guaranteeing that they will bring a smile, raise an eyebrow, and satisfy the reader’s curiosity at the same time. A foreword by famed cartoonist Dick Guindon completes this one-of-a-kind collection. Sonny Sez! will make a truly unique keepsake, perfect for displaying or giving as a gift.

This volume will appeal to everyone from longtime Sonny Eliot fans to first-time readers.

Sonny Eliot is a radio and television broadcaster and beloved Detroit personality. Some of the many awards and citations that Eliot has received include an Emmy for Best Weathercaster, 50-year Screen Actors Guild Award, Silver Circle Award from the National Academy of TV Arts and Sciences, a Lifetime Achievement Award from the Society of Professional Journalists, and the Michigan Aviation Hall of Fame.

Stanley D. Williams, Ph.D., is an award-winning writer, author, speaker, producer, and director for video, television, stage, and film. He is also the owner of a small media distribution company, Nineveh’s Crossing.