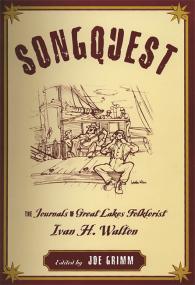 Ivan H. Walton was a pioneering folklorist who collected the songs and stories of aging sailors living along the shores of the Great Lakes in the 1930s. His collection is unique in the annals of Great Lakes folklore. It began as a search for songs but broadened into a collection of weather signs, shipboard beliefs, greenhorn tales, and stories of the intense rivalry between sailors and the steamboat men who replaced them. Edited by Joe Grimm, Songquest: The Journals of Great Lakes Folklorist Ivan H. Walton is a selection from the daily journals Walton wrote during his travels as a folklore collector.

It is clear that Walton, a professor of English at the University of Michigan, both admired the sailors of the Great Lakes for what they had done during their working years and worried about them as they entered the twilight of their lives. Walton went beyond the songs he set out to find and captured the pitch and roll of the Great Lakes alive with white-winged schooners. His writings provide a clear picture of the colorful individuals he met and interviewed—captains, cabin boys, tugmen, chandlers, boardinghouse owners, dredgers, and light keepers. Walton also documented the methods he used and recorded his personal thoughts about his nomadic life and the events going on around him during the 1930s, including the Great Depression, Franklin D. Roosevelt’s election, and the end of Prohibition.

Joe Grimm is editor of Windjammers: Songs of the Great Lakes Sailors and of Michigan Voices: Our State’s History in the Words of the People Who Lived It.

7 min 8 sec ago
TONIGHT! Join @stephanie_heit at @ShopBooksweet for local author's night! https://t.co/pTny5OErDe
21 hours 50 min ago
Have you had a chance to check out our new Spring & Summer 2023 Catalog?! From a new lyric essay collection to a p… https://t.co/cNAo9WjL9K
1 day 20 hours ago
RT @shondabuchanan: Tonight! Feb. 1, 2023, 6:30pm Mountain Time -- Virtual reading for #lewisandclarklibrary Lewis & Clark Library in H… https://t.co/UAmMoIlq1w