Home » Books » From Sofia to Jaffa 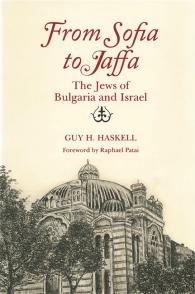 From Sofia to Jaffa

The Jews of Bulgaria and Israel

Within two years of the establishment of the State of Israel in 1948, an astounding 45,000 of Bulgaria’s 50,000 Jews left voluntarily for Israel. This mass exodus was remarkable considering that Bulgaria was the only Axis power to prevent the deportation of its Jews to the death camps during World War II. After their arrival in Israel, the Jews of Bulgaria were recognized as a model immigrant group in a fledgling state attempting to absorb hundreds of thousands of newcomers from more than eighty countries. They became known for their independence, self-reliance, honesty, and hard work.

From Sofia to Jaffa chronicles the fascinating saga of a population relocated, a story that has not been told until now. Beginning with a study of the community in Bulgaria and the factors that motivated them to leave their homeland, this book documents the journey of the Bulgarian Jews to Israel and their adaptation to life there.

Guy H. Haskell is the general editor of the Jewish Folklore and Ethnology Review. He received his Ph.D. from Indiana University.